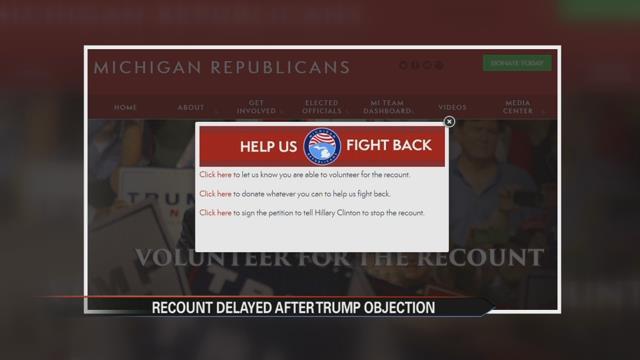 “We have people ready to work; we’re just waiting to find out when it’s going to start,” said Monica Kennedy, the Cass County Clerk Register.

Tensions are running high across the state of Michigan. Green party Candidate Jill Stein filed for a statewide recount Wednesday..

“In Cass County, she received 199 total votes as opposed to Donald Trump’s 14,000 votes. There is no way that she is going to find that many votes, make up that number and actually change the outcome of the election,” said Kennedy.

But the Trump campaign filed an objection to stop the recount before it even begins. The Michigan Bureau of Elections received the objection Thursday, just one day after Stein filed for recount.

The objection states Stein provides no credible evidence of voter fraud or that the original count was inaccurate.

“No matter if it is approved or denied, you have to wait two business days before you can begin the recount. The earliest we could begin a recount is next Tuesday afternoon,” said Kennedy.

So all those plans…

“We had a schedule and the recount was to begin tomorrow morning which if Friday, December 2nd,” said Kennedy.

..Are out the window until the Board of State Canvassers resolves the objection.

“That really pushes us back on our time frame.”

In the filing, Trump alleges the recount would go beyond the December 13 deadline for Michigan to certify its electors.

Either way, the work stays on county clerks.

“The State informed us that we were to work every day of the week, Saturdays and Sundays, beginning at 8:30 in the morning and ending no later than 7:00 p.m.,” said Kennedy.

And they’re already ready for it to be over with.

“It’s been a very stressful very busy election and so we’re looking forward to closing the books once and for all and making the election official,” said Kennedy.

The Board of State Canvassers will consider resolution of the objection on December 2 at 9:30 a.m.

If the objection is not adopted by the board, the recount can begin after the second business day following the decision.

If the board adopts the objection, the recount would end.

Recount activity planned to begin on Friday has been halted until the resolution of the objection.