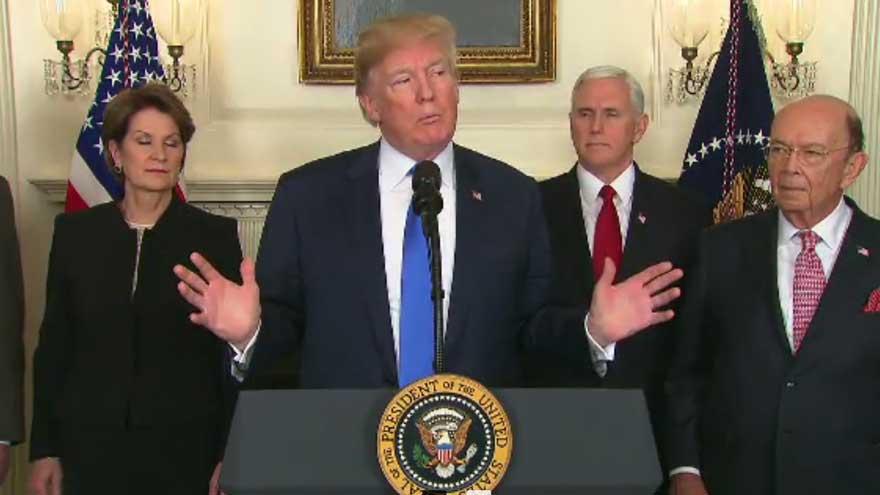 (CNN) -- President Donald Trump launched the next salvo in his widening war on Chinese trade abuses, this time taking aim at China's unfair seizure of US intellectual property.

Trump on Thursday directed the US trade representative to level tariffs on about $50 billion worth of Chinese imports following a seven-month investigation into the intellectual property theft, which has been a longstanding point of contention in US-China trade relations. In addition to the tariffs, the US also plans to impose new investment restrictions, take action against China at the World Trade Organization and the Treasury Department also will propose additional measures.

"We have a tremendous intellectual property theft problem," Trump said. "It's going to make us a much stronger, much richer nation."

The move, which comes on the heels of the administration's steel and aluminum tariffs that also took aim at China, has already been met with threats of retaliation from China and is heightening concerns of a global trade war that could destabilize the global economy -- fears the Trump administration has repeatedly brushed off.

Trump on Thursday signed a memorandum announcing the trade actions, invoking Section 301 of the 1974 Trade Act, which formed the basis for the administration's investigation.

Before signing the measure, Trump lamented the US' multi-hundred billion dollar trade deficit with China and said the action would be "the first of many."

Trump prefaced his trade action by insisting he views China as a "friend" and said he has "tremendous respect" for Chinese President Xi Jinping, as he flicked to China's support in pressuring North Korea to denuclearize.

"They are helping us a lot in North Korea," Trump said. "But we have a trade deficit ... there are many different ways of looking at it, but no matter which way you look at it, it is the largest trade deficit of any country in the history of the world."

Trump said the US would continue to engage diplomatically with China to reduce the trade imbalance, even as he signed an action that is likely to exacerbate tensions between the two countries.

Robert Lighthizer, the US trade representative, said the tariffs would focus on theft of US technologies and said Trump "concluded that we should put in place tariffs on appropriate products" following the investigation.

"This is an extremely important action. Very significant and very important for the future of the country, really across industries," Lighthizer said.

The investigation concluded that China has stolen or coerced US companies into turning over their intellectual property through a series of state-run structural maneuvers, including its requirement that foreign companies partner with Chinese companies to access the Chinese market, said Everett Eissenstat, the deputy director of the National Economic Council for international economic affairs.

The investigation also assessed that China has stolen US intellectual property by hacking US computer networks, though senior administration officials said Thursday's tariffs would not account for the value of that intellectual property theft, which they estimated to be in the hundreds of billions of dollars.

The incoming tariffs are the most significant to date from a President who campaigned on a promise to correct the US' global trade imbalance, particularly with China, and to revitalize US manufacturing. The move is just the latest sign that Trump is intent on putting his protectionist rhetoric into action despite concerns from economists and financial analysts, including within his own administration.

Beyond the threat of a far-reaching trade war, economists have warned US consumers are likely to bear the cost of the tariffs and worries about Chinese retaliation are mounting.

"A trade war does no good to anyone. There is no winner," China's Premier Li Keqiang said at a news conference in Beijing in anticipation of the Trump administration's tariff action.

The Trump administration, though, has said it is simply taking long-overdue action following years of unfair Chinese trading practices that they argue previous administrations have insufficiently countered.

Peter Navarro, Trump's hawkish top trade adviser, said the administration had decided on the tariffs in lockstep and said the US opted to take tariff actions after dialogues with China over the last 15 years have failed to produce significant changes in Chinese behavior.

"Administrations before us and this administration has tried very, very hard to work with the Chinese," Navarro said. "Talk is not cheap. It has been very expensive to the American people."

The tariffs will not take immediate effect. Instead, the US trade representative will publish a list of targeted goods within 15 days and will then allow for a 30-day public comment period.

"In terms of the broader calculus of the harm that is done by what is the theft ... of intellectual property is almost incalculable," the official said.