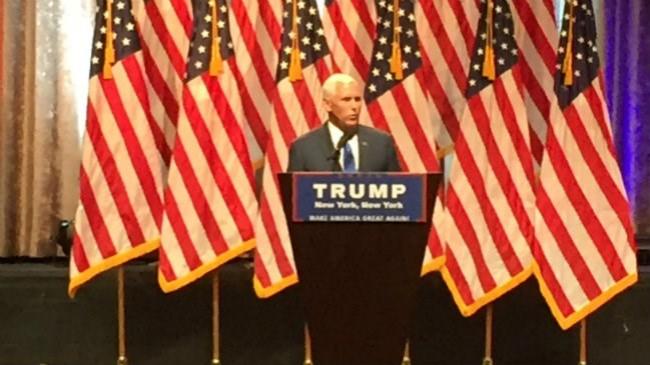 "We're going to declare war against ISIS. We have to wipe out ISIS," Trump said in the interview with CBS' Lesley Stahl set to air on "60 Minutes" Sunday night.

"I am going to have very few troops on the ground. We're going to have unbelievable intelligence, which we need; which, right now, we don't have. We don't have the people over there," he said.

Trump added: "We're going to have surrounding states and, very importantly, get NATO involved because we support NATO far more than we should, frankly, because you have a lot of countries that aren't doing what they're supposed to be doing. We have to wipe out ISIS."

The interview -- featuring Trump and Pence side-by-side for the first time -- comes the week the Republican National Convention in Cleveland is set to nominate the two to face Hillary Clinton in the general election.

Trump tweeted on Sunday, "We are TRYING to fight ISIS, and now our own people are killing our police. Our country is divided and out of control. The world is watching."

Trump also laid the blame for the rise of ISIS at the feet of Clinton -- who was President Barack Obama's secretary of state during his first four years in office.

"Hillary Clinton invented ISIS with her stupid policies. She is responsible for ISIS. She led Barack Obama -- because I don't think he knew anything; I think he relied on her," Trump said. "As Bernie Sanders said, 'Her judgment is so bad.' She's got bad judgment. She's got bad instincts."

Pence criticized Obama and Clinton, saying the two have "led from behind."

"The larger issue here is declining American power in the world," he said. "I truly do believe that history teaches that weakness arouses evil. And whether it be the horrific attack in France, the inspired attacks here in the United States, the instability in Turkey that led to a coup -- I think that is all a result of a foreign policy of Hillary Clinton and Barack Obama that has led from behind and that has sent an inexact, unclear message, about American resolve."

Their remarks on foreign policy were among the partial transcripts released by "60 Minutes" ahead of the broadcast of the interview.

In the interview, Trump also said he didn't expect Pence to campaign in a similar manner to his brash, confrontational style.