Trump on North Korean missile launch: 'We will take care of it' 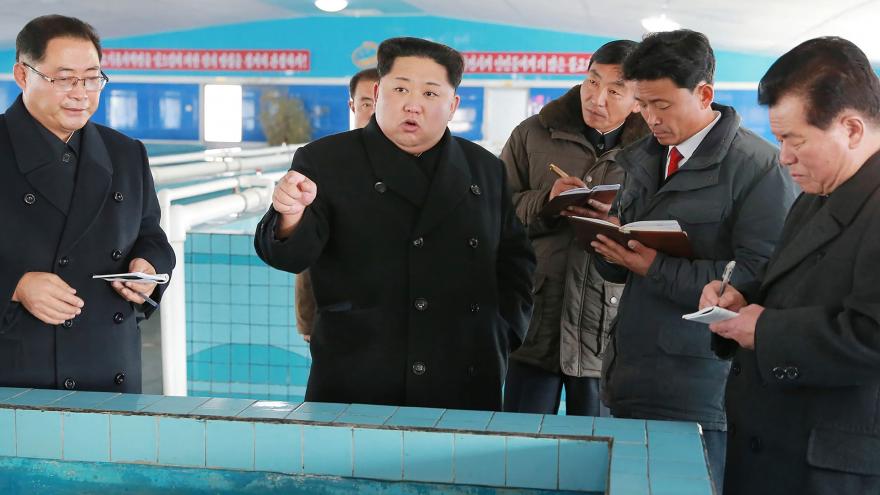 (CNN) -- President Donald Trump told reporters at the White House on Tuesday that the United States "will handle" the situation in North Korea after the rogue nation launched yet another intercontinental ballistic missile earlier in the day.

"We will take care of it," Trump said, adding later that North Korea "is a situation that we will handle."

The Pentagon confirmed earlier Tuesday that North Korea launched what the US military believes to be an intercontinental ballistic missile.

Secretary of Defense Jim Mattis told reporters that the North Korean missile test went "higher, frankly, than any previous shot they have taken."

Mattis made remarks as he sat in on a meeting with Trump, House Speaker Ryan and Senate Majority Leader McConnell. The defense secretary added that North Korea has the ability to hit "everywhere in the world basically."

Pentagon spokesperson Col. Rob Manning told reporters that the missile was "launched from Sain Ni, North Korea, and traveled about 1,000 kilometers before splashing down in the Sea of Japan, within Japan's Economic Exclusion Zone."

"The North American Aerospace Defense Command (NORAD) determined the missile launch from North Korea did not pose a threat to North America, our territories or our allies," Manning added.

The precision missile strike matched the flight distance of the North Korean missile and landed in waters off the east coast of South Korea.

South Korea's Joint Chiefs of Staff added that its counter drill tested a scenario of simultaneously hitting a target through the land, air and sea, but did not elaborate further.

"It is a measured and pointed response but also a reminder that the peninsula remains on hair trigger alert, he told CNN. "In this situation, provocations or even mistakes could quickly escalate out of control."

White House press secretary Sarah Sanders said on Twitter that President Donald Trump "was briefed, while missile was still in the air, on the situation in North Korea."

Guam's Homeland Security/Office of Civil Defense posted on Facebook that they were notified that North Korea "conducted a ballistic missile launch" but there is no immediate threat to them or the Marianas.

The missile was launched from the west part of North Korea and is likely to have landed in Japan's Exclusive Economic Zone after flying for about 50 minutes, according to Masaki Hikida, public relations officer from Japan's Ministry of Defense.

A 50-minute flight time would also suggest that this was a major ICBM test "possibly in operational settings" and should "disabuse US officials from thinking military displays, sanctions, or threats are deterring North Korean tests," according to Mount.

"Today's test proves that Pyongyang still feels able to test at will," he told CNN, adding it also shows the Trump administration "has to get serious about deterring an atmospheric nuclear test."

North Korean Foreign Ministry Ri Yong Ho hinted in September that Pyongyang could carry out an atmospheric nuclear test over the Pacific Ocean, possibly by strapping a warhead atop a missile or dropping it from an airplane.

US defense and intelligence officials had been growing increasingly puzzled as to why North Korean leader Kim Jong Un had not tested a ballistic missile since September.

Before Wednesday's test, North Korea had fired 22 missiles without active warheads during 15 tests since February. US officials say North Korea is continuing to develop its missiles, rocket fuel and engines, as well as targeting and guidance systems.

The US believes Pyongyang may be able to put a miniaturized warhead on a missile sometime in 2018 -- giving it the theoretical capability to launch a missile with a warhead atop that could attack the US.

North Korea has launched missiles at an unprecedented rate in 2017.

Pyongyang tested two missiles in July that demonstrated intercontinental range. It is currently testing a more advanced version of its existing ICBM, a US official told CNN earlier this month.