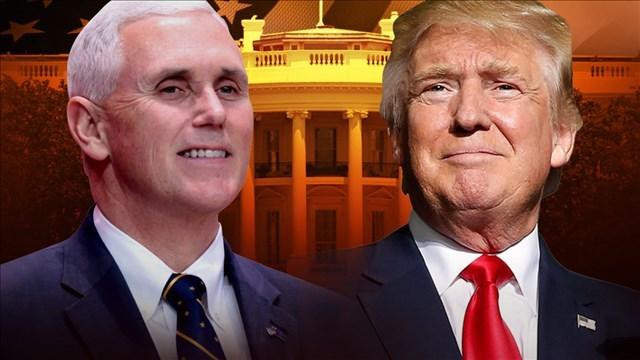 "Our wonderful future V.P. Mike Pence was harassed last night at the theater by the cast of Hamilton, cameras blazing.This should not happen!" Trump tweeted Saturday morning.

He followed up: "The Theater must always be a safe and special place. The cast of Hamilton was very rude last night to a very good man, Mike Pence. Apologize!"

Cast member Brandon Dixon, who portrays Aaron Burr in the Broadway show and delivered the statement to Pence during the curtain call, soon replied on Twitter, "@realDonaldTrump conversation is not harassment sir. And I appreciate @mike_pence for stopping to listen."

Trump fired back Saturday evening, reiterating his feelings about the statement and taking a jab at Dixon for reading it from a cue card: "Very rude and insulting of Hamilton cast member to treat our great future V.P. Mike Pence to a theater lecture. Couldn't even memorize lines!"

Word spread on social media Friday night that Pence was in the house for the hit show, and during the curtain call, Dixon urged Pence to "work on behalf of all of us."

"Vice President-elect Pence, we welcome you and we truly thank you for joining us here at 'Hamilton: An American Musical.' We really do," Dixon said.

"We, sir, we are the diverse America who are alarmed and anxious that your new administration will not protect us, our planet, our children, our parents or defend us and uphold our inalienable rights, sir. But we truly hope this show has inspired you to uphold our American values and work on behalf of all of us. All of us."

Dixon, who urged the audience not to boo Pence, said the show was performed by "a diverse group of men and women of different colors, creeds and orientations."

Sam Rudy, a publicist for "Hamilton," said Pence was exiting the theater at the time and stopped to listen to Dixon. Rudy described Dixon's remarks as a "polite request" and said he can "see no way whatsoever how the cast of 'Hamilton' can be seen as being rude."

"I don't know what (Trump) qualifies as harassment," Rudy added.

Messages left with Pence representatives were not returned.

Pence, who has been in New York to assist with Trump's transition, was greeted inside the theater earlier in the night by a chorus of boos and some applause.

Despite Trump's harsh rebuke of the confrontation, Dixon's rhetoric was not dissimilar to remarks Trump himself has made in the past about uniting the country.

"I'm asking America to join me in dreaming big and bold, and dream for wonderful things in our future. Let's close the history books on the failures in Washington and let's open a new chapter of success and prosperity for all of our people. We have a divided nation, a seriously divided nation. All of our people -- that is how we will truly make American great again," Trump said in Washington last month.

"Hamilton" creator Lin-Manuel Miranda is no stranger to politics, having backed Hillary Clinton during this year's election cycle. In addition to endorsing Clinton, Miranda held a benefit showing of the musical in July, where admission to the show supported the Clinton campaign -- some tickets reportedly went for as much as $10,000.