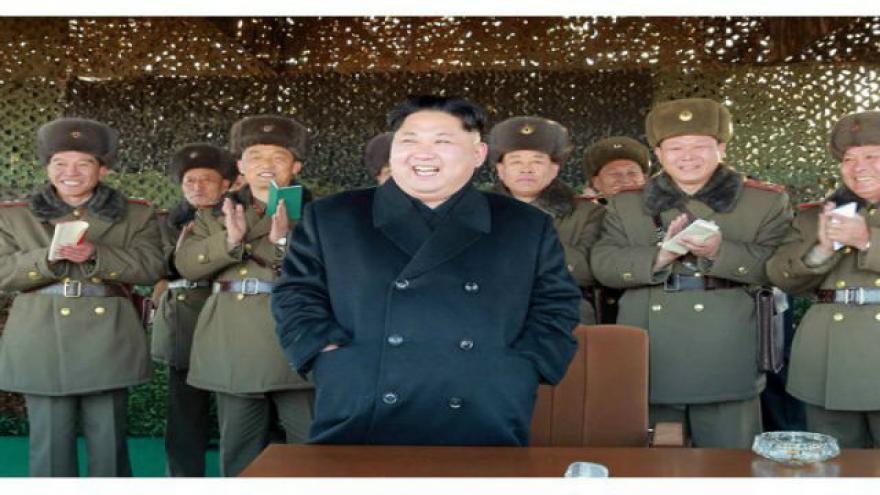 (CNN) -- President Donald Trump issued an extraordinary ultimatum to North Korea on Tuesday warning Pyongyang not to make any more threats against the United States or they will "face fire and fury like the world has never seen," during a photo op at the Trump National Golf Club in Bedminster, New Jersey.

Trump's harsh words come as US intelligence analysts have assessed that North Korea has produced a miniaturized nuclear warhead, according to multiple sources familiar with the analysis of North Korea's missile and nuclear program.

Soon after Trump's comments, North Korea issued a statement saying it was "examining the operational plan" to strike areas around the US territory of Guam in the Pacific, including the Andersen Air Force base.

While it was released Wednesday, the statement was dated Tuesday and didn't make any reference to Trump's comments. It did, however, express anger over a US flyby of B-1B bombers on Monday. Pacific Air Forces confirmed Japanese and South Korean jets had joined the drills.

Another statement was issued by North Korean state media Wednesday warning the US that a "preemptive strike is no longer the monopoly of the US."

The escalating threats from the US and North Korea have put North Asia on edge.

South Korean President Moon Jae-in has called for the country to reform and improve its defensive capabilities to counter ongoing threats from North Korea.

"I believe our given task is reform of the military. It should be an intensive one. I believe we need a defense reform at a level of a complete overhaul, instead of minor improvements or modifications," Moon said Wednesday. He didn't address Trump's threats to unleash "fire and fury."

"As the security situation in the region becomes increasingly difficult, the US's deterrence capability is extremely important to Japan. The US has said all options are on the table and Japan welcomes this," Suga told a press briefing.

Stock markets in Japan and South Korea fell in response to the rising tension.

Does North Korea have a miniaturized nuclear warhead?

While US intelligence analysts have assessed that North Korea has produced a miniaturized nuclear warhead, it's not believed that the capability has been tested, according to the sources.

This is not a consensus view from the entire intelligence community, one US official said. The Washington Post, which was first to publish details, reported that it was the analysis of the Defense Intelligence Agency.

The US official familiar with the analysis of North Korea's missile and nuclear program says, in reference to North Korea's leader Kim Jong Un's boasts about the program, "we have to take him at his word and we need to be prepared to deal with it."

This official said the 'assessment" is continuing to be refined and updated as more intelligence is collected.

That language echoes comments made by Adm. Harry Harris, the head of the US Pacific Command (PACOM), during a June speech in Australia.

"I know there's some debate about the miniaturization advancements made by Pyongyang. But PACOM must be prepared to fight tonight, so I take him at his word. I must assume his claims are true -- I know his aspirations certainly are," he said.

The officials all note that the evidence shows North Korea is making progress and the question is more about when not if North Korea is capable of launching a nuclear capable missile.

Referring to Kim Jong Un, the official said this report needs to be taken seriously as "we've seen him moving forward" on the program with no indication he is turning back.

US military commanders have long planned on the assumption that North Korea has a warhead and Pyongyang claimed to be able to miniaturize nuclear weapons in 2015.

In 2014, then-commander of US Forces Korea Gen. Curtis Scaparrotti said he believed that they had the capability to miniaturize a warhead.

"I believe they have the capability to have miniaturized a device at this point, and they have the technology to potentially actually deliver what they say they have," Scaparrotti said at the time.

But other lawmakers were quick to condemn Trump's statement, including US Sen. John McCain, the chairman of the Senate Armed Services Committee.

"I take exception to the President's comments because you've got to be sure that you can do what you say you're going to do," the Arizona Republican said in an interview with Phoenix radio station KTAR. "The great leaders I've seen don't threaten unless they're ready to act and I'm not sure President Trump is ready to act."

Earlier on Tuesday, President Trump was quick to highlight his administration's success in leading the UN Security Council to unanimously pass sanctions on North Korea.

Trump's fiery rhetoric, however, plays into a long-standing North Korean narrative that the nation is under the imminent threat of invasion by the United States.

For decades, the North Korean regime has told its citizens that the United States is preparing for another war on the Korean Peninsula.

While nearly all historians say the north invaded the south, North Korea tells it citizens that the Americans actually started the war.

Regular military exercises between the US and South Korea enrage Pyongyang and are conveyed to citizens as further 'proof' of an American dress rehearsal for the next invasion.

It is this narrative that the regime uses to justify the economic hardship and isolation that North Korean citizens have endured, in part due to their nation's ballistic missile and nuclear tests. Citizens are told they have to "tighten their belts" to protect their national sovereignty.

While both the US and North Korea have frequently used strong rhetoric as a strategic messaging tool, analysts warn that verbal escalations pose the risk of causing a catastrophic miscalculation.

"Complicating this delicate game is that we have two inexperienced, impulsive presidents in control of these massive military machines," Joe Cirincione, president of Ploughshares Fund, a global security foundation, told CNN on Monday.

"It's one thing to make a mistake intentionally, its another thing to stumble into a conflict," Cirincione said.  "Either one -- Kim Jong Un or Donald Trump -- could miscalculate and let loose a war unlike anything we have seen since World War II.

Is diplomacy still an option?

The risks of a military strike or all out conflict with North Korea are well documented and US Defense Secretary James Mattis has consistently said he favors finding a diplomatic solution -- warning earlier this year that military action could result in tragedy "on an unbelievable scale."

North Korean Foreign Minister Ri Yong Ho said over the weekend that Pyongyang "will, under no circumstances, put the nukes and ballistic rockets on the negotiating table," and would "teach the US a severe lesson" if it used military force against North Korea.

But while that precondition appears to remain a non-starter for North Korea, Deputy Secretary of State John Sullivan told reporters on Tuesday that the US has made clear it will not talk to North Korea until it commits to stopping its missile and nuclear tests.

"We are not going to negotiate our way to the negotiating table," Sullivan said, noting that the view of his boss, Secretary of State Rex Tillerson has not changed since he took his first trip earlier this year Tokyo, Seoul and Beijing.