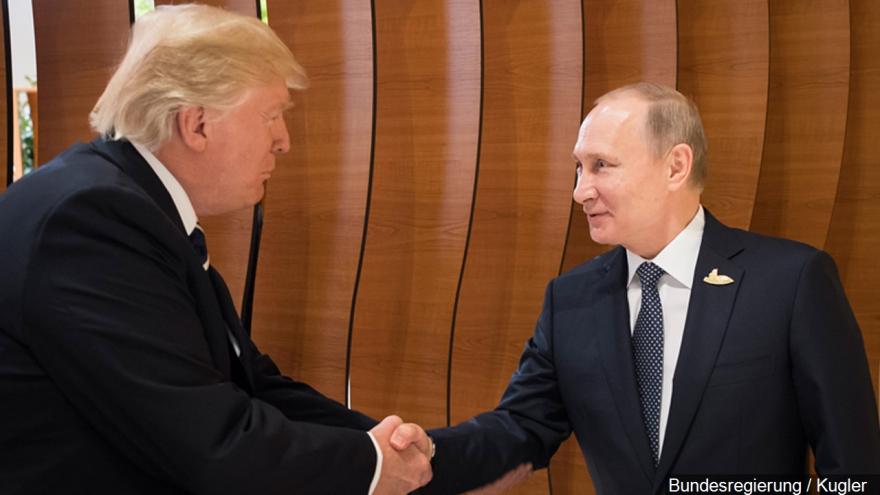 The meeting puts Trump, a man who ran for president pledging to buck US foreign relations conventions and put "America First," face-to-face with those promises as people -- including many Democrats -- in the United States urge the President to stand up to Putin, assert American dominance and challenge the Russian leader on 2016 election meddling.

"President Putin and I have been discussing various things and I think it is going very well," Trump said. "We have had some very, very good talks."

"We are going to have a talk now and obviously that is going to continue," Trump added. "We look forward to a lot of very positive things happening for Russia, and for the United States and for everybody concerned. And it's an honor to be with you."

At least during the public portion of the meeting, though, Trump declined to bring up election meddling and ignored reporters who asked him about the topic. Friday's meeting puts Trump in the same as the leader of the country that United States intelligence says meddled in the 2016 election in an effort to get Trump elected.

Putin, in a CNN translation, told Trump he was "delighted" to meet face-to-face.

"We have spoken on the phone with you several times on very important bilateral and international issues. But phone conversation are never enough," Putin said.

"If we want to resolve bilateral and acute international issues, we definitely need personal meetings. I'm delighted to be able to meet you in person Mr. President, and I hope -- as you have said -- that our meeting will yield positive results," Putin added.

Trump's formal meeting with Putin, a pivotal encounter that will likely color the tone and tenor of US relations with Russia for years, sits atop Trump's schedule of critical meetings on Friday.

The White House is aware of the stakes. Top aides have worked for weeks to prepare for this encounter with Putin, known for his craft on the international stage, and experts have suggested the White House be prepared for a curveball from the Russian president.

Trump and Putin, before their official sit-down at the G20, briefly met and shook hands in what appeared -- according to video posted by the German government -- to be a collegial encounter.

In another clip of video, the men stand side-by-side, smiling broadly. Trump then pats Putin on the back before the video cuts away.

Trump took to Twitter from Germany to look forward to his Putin meeting.

"I look forward to all meetings today with world leaders, including my meeting with Vladimir Putin," Trump said. "Much to discuss."

Any Trump-Putin meeting -- whether official or unofficial -- will likely be tense as both have pestered each other in the lead-up to the G20. Trump chided Russia's use of energy as a coercive force and for its actions in Eastern Ukraine on Thursday in Poland, while Putin subtly jabbed Trump's trade policies on the sidelines of the summit, according to the Russian state-run media.

"When discussing the situation in the global economy, the Russian side intends to focus on issues regarding ensuring positive dynamics of global trade," Putin said. "We oppose the growing policy of protectionism in the world."

Trump's meeting with Putin is surely critical. But Friday schedule is stacked with possibly tense conversations for Trump, including a prolonged sit-down with Mexican President Enrique Pena Nieto.

Trump sat between British Prime Minister Theresa May and German Chancellor Angela during Friday morning's leader retreat and was seen chatting with the British Prime Minister. Putin was seated next to Pena Nieto. Trump, who flew to Germany from Poland on Thursday afternoon, met with Merkel upon landing and had dinner with Japanese Prime Minister Shinzo Abe and South Korean President Moon Jae-in.

Because much of the G20 happens out of sight from the media, optics will likely dictate how Trump's meetings with world leaders -- particularly with Putin -- will be viewed.

Trump, a businessman-turned-politician who prided himself on the campaign trail of being a political novice, has grown more aware of how optics play a critical role in foreign relations since his first forays on the international stage. During Merkel's meeting at the White House in March, Trump failed to shake the German leader's hand during their meeting in the Oval Office. The move cemented the global view that their relationship was icy -- a view that persists today.

Focus on Syria and Ukraine

Trump, administration officials tell CNN, plans to focus primarily on disputes in Syria and Ukraine when he meets with Putin on Friday. While a formal plan for the meeting has yet to emerge, there is little expectation on the American side that Trump will bring up Russia's 2016 election activities.

The President said Thursday that Russia could have been behind efforts to influence the election but suggested the finger can be pointed elsewhere as well and that "nobody really knows for sure."

"I think it very well could be Russia but I think it could very well have been other countries," Trump said during a news conference with Polish President Andrzej Duda. Russia has denied any involvement.

US intelligence agencies concluded in a report released earlier this year that Russia ordered an "influence campaign" to harm Hillary Clinton's chances of winning the election.

Peskov, Putin's spokesman, said the Russian president took Trump's comments from Poland "into consideration" as he prepared for conversation.