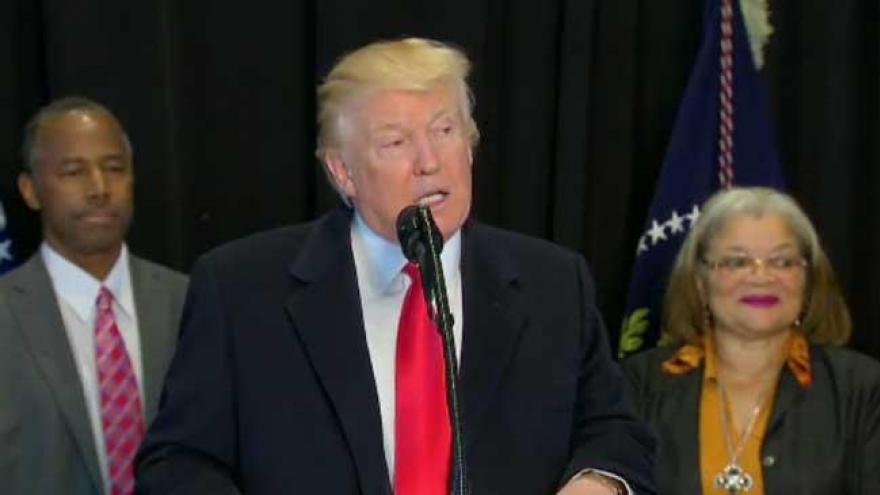 WASHINGTON (CNN) -- President Donald Trump, facing a chorus of calls from Democrats and Jewish leaders urging him to speak out against a rise in anti-Semitic incidents in the US, said Tuesday "anti-Semitism is horrible."

"I will tell you anti-Semitism is horrible, and it's going to stop and it has to stop," he told MSNBC.

Asked if he was denouncing it, Trump said: "Of course, and I do it, wherever I get a chance, I do it."

And Rep. Jerry Nadler, D-New York, before Trump made his comments during an appearance at the African-American History Museum, questioned why Trump had not spoken out against anti-Semitic incidents in the US despite being pressed on the issue multiple times during recent news conferences.

"The question isn't why hasn't he spoken out more vociferously, the question is why hasn't he spoken out period? And why has he evaded two questions in his last two press conferences on this question?" Nadler said Tuesday on CNN's "New Day." "Maybe he doesn't want to denounce his own supporters because some of his own supporters are responsible for this."

Jewish leaders in recent days urged Trump to speak out against the rise in anti-Semitic incidents and address how he will work to combat anti-Semitism in the US, Trump failed to address those questions when they were posed to him during recent news conferences.

The New York Police Department has said there has been a rise in anti-Semitic incidents in New York and the JCC Association of North America has reported 69 threats at 54 Jewish community centers since January.

The White House issued a statement Monday denouncing recent anti-Semitic threats, saying "hatred and hate-motivated violence of any kind have no place in a country founded on the promise of individual freedom."

"The President has made it abundantly clear that these actions are unacceptable," White House spokeswoman Lindsay Walters said in the statement.

Trump's daughter, Ivanka, who converted to Judaism, also tweeted Monday evening that "we must protect our houses of worship & religious centers."

But pressed during two news conferences last week to address the rise in anti-Semitic incidents, Trump chose to focus on defending himself against personal charges of anti-Semitism, declaring himself the "least anti-Semitic person that you've ever seen in your entire life," rather than addressing threats against the Jewish community in the US.

Trump also berated a Jewish reporter for asking about how the government planned to address the rise in anti-Semitic incidents, telling him repeatedly to "sit down" and be "quiet," even though the reporter made clear he did not believe Trump himself was anti-Semitic.

The Anti-Defamation League has since called on Trump to speak out against the anti-Semitic incidents and explain how his administration will address the rise in threats.

Malcolm Hoenlein, the executive vice-chairman of the Conference of President of Major American Jewish Organizations, said Sunday in Jerusalme that "the president helps set the tone for a country."

"I'm hopeful that what he said about ... addressing hate and racism of all kinds in American society will be translated into clear action," Hoenlein said.