Trump returns to Gulf Coast for test as 'comforter in chief' 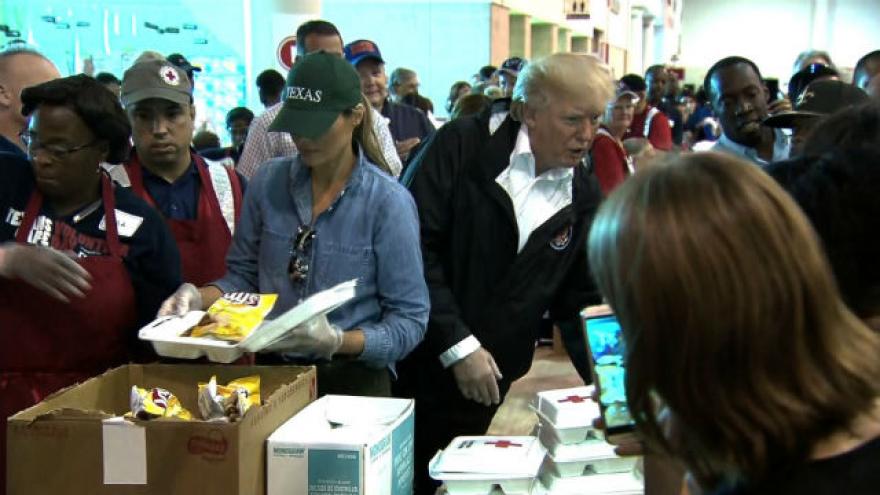 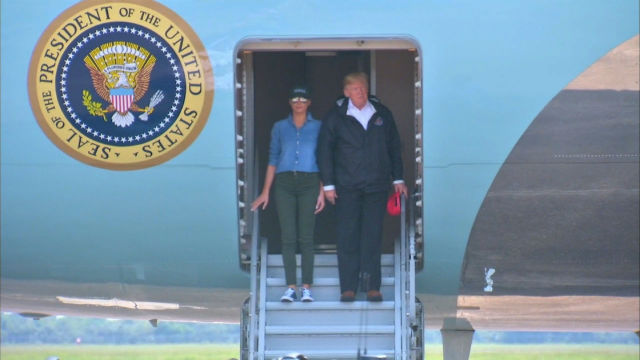 (CNN) -- President Donald Trump is getting a second chance at the post-natural disaster presidential visit, embracing the role of "comforter in chief" in a multi-stop tour of areas hard-hit by Harvey.

Trump, joined by first lady Melania Trump, landed here at just after noon ET on Saturday to witness the devastation wrought by the storm firsthand and meet with survivors, four days after his first visit to Texas. Then, he touted the size of the crowd that greeted him outside a firehouse but failed to mention the storm's victims, leaving critics and even some allies saying he failed to demonstrate the empathy and compassion presidents are expected to display during these visits.

Trump stayed mostly indoors during his visit to the state on Tuesday, where he received briefings on the disaster relief efforts from federal, state and local officials -- an itinerary aimed at avoiding the worst-hit areas so as not to pull emergency responder resources from ongoing search-and-rescue operations.

His visit Saturday was markedly different, showcasing a President eager to demonstrate a hands-on approach and check the boxes he wasn't able to during the initial trip.

Texans young and old are facing months -- and likely years -- of recovery. For instance, the Houston Independent School District said Saturday that between 10,000 and 12,000 students will need to be relocated temporarily because of the storm damage.

Saturday, Trump saw firsthand the challenges facing the area and connected with those directly affected by Harvey's devastation as well as the many volunteers coming to their assistance.

Flooding and damage were visible from the air before landing, according to pool reporters traveling with the President on Air Force One.

As Trump rode through the area, his presidential motorcade passed debris and other signs of the damage, with rugs, mattresses and drywall littering the roads.

Trump headed first to the NRG Center, a stadium housing many victims of the storm and the flooding in the Houston area. He visited a makeshift "kid zone" set up with toys and activities for the many displaced children, and he and the first lady donned gloves to hand out boxed lunches. Trump shared hugs and shook hands with victims and volunteers, including many children, showing a personal level of empathy for victims not yet seen from the President in the week since Harvey made landfall.

Despite the difficult circumstances, Trump was received with many smiles. He lifted one little girl into his arms, posing for selfies along the way.

"Really, I think people appreciate what's been done," the President told reporters at NRG. "It's been done really efficiently, really well and that's what we want. I'm very happy with the way it's been going." He added that there's "a lot of love."

Since Tuesday night, NRG has sheltered nearly 4,200 people, with more than 1,700 present during Trump's visit.

After departing the shelter, Trump stopped by First Church of Pearland, where he delivered brief remarks to volunteers assembled and loaded cars with supplies.

The President struck a congratulatory tone, praising the work of local officials and first responders -- a "cheerleader in chief" of sorts.

"They say two years, three years. I think because this is Texas, you'll do it in six months," Trump said at First Church.

He also praised service members from the Coast Guard and the Army before departing Ellington Field.

"You have done so much for the prestige of the services," Trump said, touting the bravery of the Coast Guard during rescue efforts.

"You have done something really special. We're with you a thousand percent," he said.

Traveling on to Lake Charles, Louisiana, Trump met with members of the state's congressional delegation and greeted troops, civilians and members of the "Cajun Navy," a volunteer group assisting with search and recovery efforts.

The President has been eager to show he is engaged in helping with the response to the storm, including posts on social media and public remarks.

"When one part of America hurts, we all hurt," Trump said in his weekly address. "When we see neighbors in need, we rush to their aid. We don't ask their names or where they are from -- we help our fellow Americans every single time."

He added: "All American hearts are with the people of Texas and Louisiana. We mourn and pray and struggle through the hardships -- together."

But Trump's second visit on Saturday now comes in the wake of a visit by his Vice President Mike Pence, who toured some of those hard-hit areas on Thursday, hugging victims and clearing debris in a tour that amplified the criticism that Trump had faced.

Trump appears to have internalized much of that criticism, tweeting the morning after his visit that his "heart goes out even more so to the great people of Texas!"

He claimed to have witnessed "firsthand the horror & devastation," although reporters traveling with him said he did not.

And Trump acknowledged the need for more empathy he addressed the storm with a decidedly more emotional tone during a Wednesday speech on tax reform in Missouri.

"We see friend helping friend, neighbor helping neighbor, and stranger helping stranger, and together, we will endure and we will overcome," he said.

He added: "To those Americans who have lost loved ones, all of America is grieving with you and our hearts are joined with yours forever."

Saturday's stops offered Trump another opportunity to serve as the nation's "comforter in chief" following the tragedy, his first major crisis while in office.

But his vice president -- who played that part Thursday -- raised the bar for Trump going into his visit on Saturday. Pence prayed at a church badly damaged by the storm, rolled up his sleeves as he met with victims whose homes were damaged, and even got to work dragging tree branches out of a front lawn, perhaps foreshadowing imagery from the President's forthcoming trip.

As the floodwaters subside and the death toll likely rises in the coming days, the storm will also begin to have long-term political implications for the administration.

Harvey is projected to be one of the most expensive natural disasters in US history. Two estimates on Wednesday put total losses -- including property damage, lost wages and disrupted business -- as high as $75 billion.

"We are still in response mode, and that means lifesaving, life-sustaining," homeland security adviser Tom Bossert told reporters at the White House Thursday. "But we're soon going to move into a long, frustrating recovery process. And the important message for me to leave to the American people and to the people of Texas and Louisiana at that point, is that we're not going anywhere."

Trump was able to reassure those in need that federal resources will be there as they begin the rebuilding process; the Trump administration on Friday asked Congress for $7.85 billion in disaster relief funding as part of an initial request for funds.

Speaking to reporters at NRG stadium, Trump praised the relationship between state, local and federal officials.

"We're signing a lot of documents now to get money, $7.9 billion," he said, adding that the request would be going through a "hopefully quick process" in Congress. The House could vote on the funding as early as next week.

And the Trumps have promised to cut a $1 million check to Texas recovery efforts, White House press secretary Sarah Huckabee Sanders announced Thursday. The President has not yet determined which group or groups will receive the donation.

As Trump greeted people in one especially hard-hit suburban Houston neighborhood, a resident joked he was waiting for Noah's Ark to come down the street during the flooding.

"But you guys did," the man said to the President. "And that's what counts."