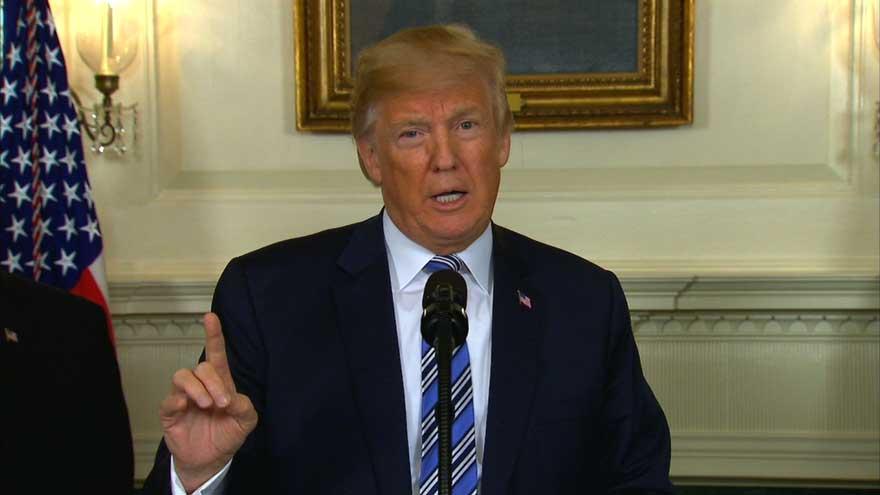 By ZEKE MILLER and MATTHEW PENNINGTON

WASHINGTON (AP) — President Donald Trump said Friday that the time and place have been set for his landmark meeting with North Korea's Kim Jong Un — but kept the world guessing for now about the when and where.

Trump also said that withdrawal of U.S. troops from South Korea was "not on the table" as he looks to get Kim to give up his nukes at what will be the first summit of between a U.S. and a North Korean leader.

The New York Times reported that Trump has asked the Pentagon to prepare plans for scaling back the U.S. military presence in the allied Asian nation. Some 28,500 U.S. forces are based there, a military presence that has been preserved since the Korean War ended in 1953 without a peace treaty.

North Korea has long sought the removal of those troops as one of its conditions for denuclearization. It remains unclear if Kim has relaxed that demand as he turns to diplomacy with adversaries after a year of escalating tensions.

Trump suggested Monday that he was looking for his historic meeting with the North Korean dictator to be held at the demilitarized zone between the two Koreas. That's where Kim met with South Korean President Moon Jae-in last Friday — a summit that has paved the way for the U.S. president's planned face-to-face with Kim.

Trump also said then that the Southeast Asian city state of Singapore was also in the running to play host.

"We now have a date and we have a location. We'll be announcing it soon," Trump told reporters Friday from the White House South Lawn before departing for Dallas.

He's previously said the summit was planned for May or early June. On Thursday, Vice President Mike Pence postponed a planned trip to Brazil at the end of May to free up resources for the summit.

Trump on Friday also heavily hinted that the release of three Americans by North Korea was in the offing, but again was sparing on the details.

"We're having very substantive talks with North Korea and a lot of things have already happened with respect to the hostages, and I think you're going to see very good things. As I said yesterday, stay tuned," Trump said, referring to an earlier tweet on the issue that has also weighed on U.S.-North Korean ties.

Although Trump has placed considerable faith in South Korean leader Moon's efforts to patch up relations with North Korea, the U.S. president has long complained that South Korea does not do enough to financially support the American military commitment.

National security adviser John Bolton, who was due to meet his South Korean counterpart Chung Eui-yong in Washington on Friday, called the Times report "utter nonsense."

"The president has not asked the Pentagon to provide options for reducing American forces stationed in South Korea," Bolton said in a statement.