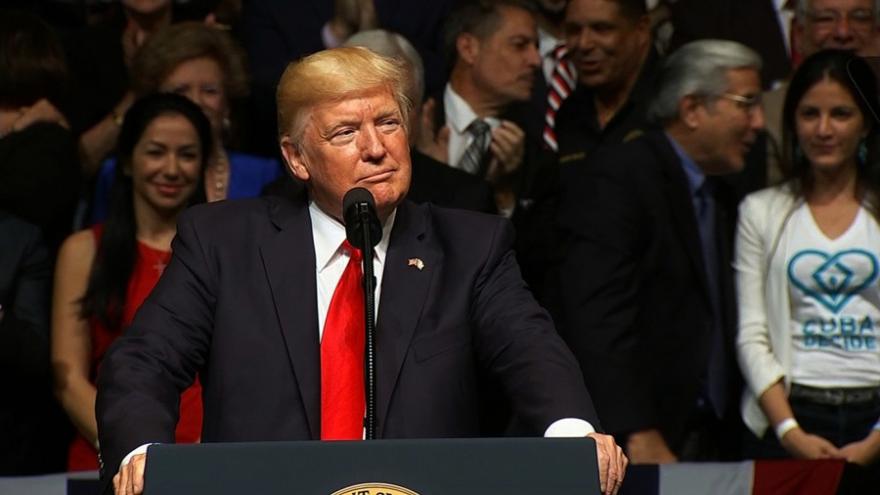 (CNN) -- President Donald Trump will issue harsh warnings to North Korea and Iran during his closely watched address to the United Nations on Tuesday.

In remarks that will encourage nations to take responsibility for their own security while calling for collective action against rogue nations, Trump will seek to spell out in the most decisive terms to date his approach to an increasingly volatile world.

Trump has delivered major foreign policy addresses before, to a gathering of Muslim leaders in Saudi Arabia and in a packed central square in Poland. But the issues at the United Nations are broader, and the geographic spread of Trump's audience wider. His message here will resonate in capitals worldwide, where officials and leaders are still seeking a cohesive foreign policy doctrine from new American leader.

A day short of the eight-month mark of his presidency, Trump will work to describe in broad terms how he views a world that's grown increasingly unstable under his tenure. He'll call out North Korea and Iran in cutting terms, and encourage other countries to follow along in his attempts to curb provocative behavior.

But he'll also deliver a "deeply philosophical address," according to a senior administration official involved in its drafting, one that frames his foreign policy as a rational attempt to move countries toward working in their own self-interests.

"It's an incredible moment and an enormous opportunity to demonstrate US leadership and US values," the official said, saying that was "why (Trump) spent so much time honing and crafting this address to express that vision to the world."

The speech will strike a pragmatic approach that relies on countries acting in their own self-interests rather than those of a collective body, the official said. Trump will explain that when countries are working in shared self-interest they could accomplish more.

The speech addresses "the need for us to work towards common goals" and not to dictate to other countries "how to live, what system of government to have," the official said.

Trump will specifically call out Iran and North Korea, making the argument that their governments are acting outside of their people's self-interest.

He will "speak in extremely tough terms about the North Korea menace and the threat it poses to our security and the security to all the nations in that room," the official said.

For a President whose election and elevation to the White House was among the most improbable in modern political history, the United Nations stage represents a presidential setting, even if some in the audience still find the sight of Trump in front of the iconic green marble jarring.

Trump has offered a wide range of views on the UN in the past, most recently determining the body is underperforming and inefficient.

"In recent years, the United Nations has not reached its full potential because of bureaucracy and mismanagement," Trump said Monday during a meeting about reforming the UN, his first remarks during a hurried week of diplomacy here. "We are not seeing the results in line with this investment."

Despite the criticism, Trump has seen some of his top foreign policy victories emerge from the UN's Security Council, which has passed rounds of sanctions on North Korea for its ballistic missile program.