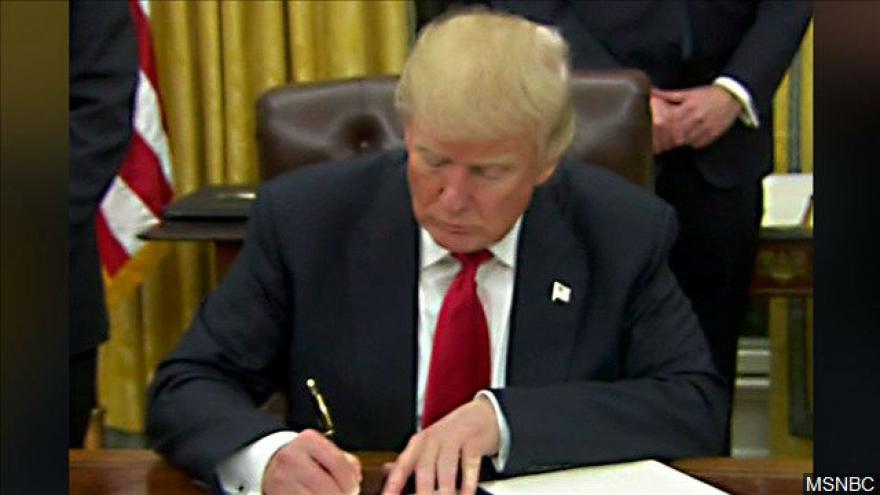 Hours after he returned to rhetoric equating violence from white supremacists with those protesting them, the White House said Thursday that President Donald Trump signed a resolution condemning white supremacy. Photo courtesy MSNBC

(CNN) -- Hours after he returned to rhetoric equating violence from white supremacists with those protesting them, the White House said Thursday that President Donald Trump signed a resolution condemning white supremacy.

In the White House statement, Trump said he opposed bigotry in all forms.

"No matter the color of our skin or our ethnic heritage, we all live under the same laws, we all salute the same great flag, and we are all made by the same almighty God," Trump said.

Congress passed the resolution earlier this week, pushing Trump to put his signature on something expressly singling out white supremacy for condemnation. The White House said in response to the resolution's passage that Trump would "absolutely" sign it, and looked forward to the opportunity.

The resolution also honored Heather Heyer, who was killed amid the racially charged violence that weekend. A 20-year-old, who acquaintances described as a neo-Nazi sympathizer, was charged with second-degree murder in Heyer's death.

Trump initially responded to the deadly incident by decrying violence on "many sides," then after sustained calls for him to denounce white supremacy specifically, Trump delivered a statement doing so.

Then at a press conference several days later, Trump said there were "very fine people" on both sides.

On Wednesday, Trump met with GOP South Carolina Sen. Tim Scott, the chamber's lone African-American Republican. The President said Thursday that the meeting went well, but repeated rhetoric casting blame on both sides for the violence at Charlottesville.