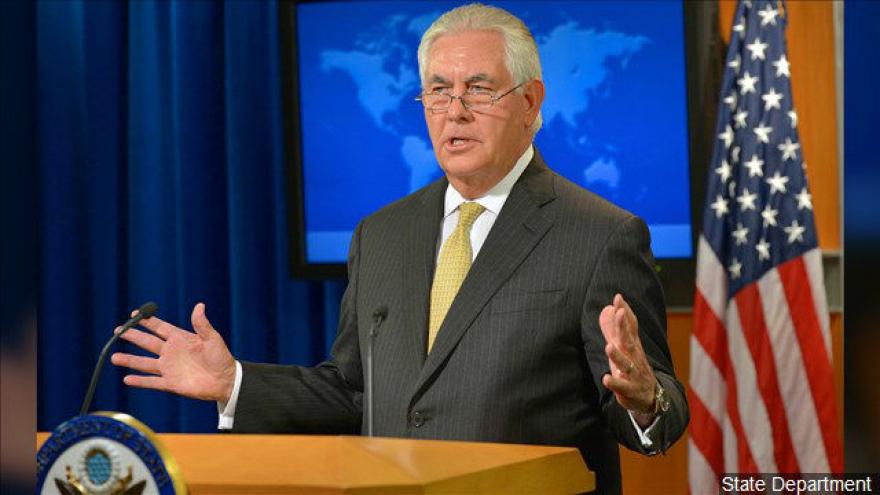 (CNN) -- President Donald Trump on Sunday again mocked North Korean leader Kim Jong Un and said Secretary of State Rex Tillerson should not bother trying to negotiate with him in an effort to stop the country's development of nuclear weapons.

"I told Rex Tillerson, our wonderful Secretary of State, that he is wasting his time trying to negotiate with Little Rocket Man..." Trump said on Twitter.

He continued, "...Save your energy Rex, we'll do what has to be done!"

Kim was officially declared leader of North Korea following the death of his father, Kim Jong Il, in 2011.

Trump's tweets undermining his secretary of state follow his attacks Saturday on San Juan's mayor over the Puerto Rico hurricane crisis and come a day after Tillerson said the US had direct lines of communication with North Korea and that he was trying to "calm things down" following months of escalating rhetoric over Pyongyang's continued nuclear weapons and ballistic missile tests.

Tillerson, speaking at a press conference in Beijing, said the US made it clear through its direct channels to North Korea that it was seeking peace through talks.

"We've made it clear that we hope to resolve this through talks," Tillerson said.

"I think the most immediate action that we need is to calm things down," Tillerson added. "They're a little overheated right now, and I think we need to calm them down first."

Asked about Trump's own rhetoric, Tillerson said the entire situation was "overheated."

Trump's tweets on Sunday seem to directly counter Tillerson's stated goal to use direct communication to lower tension between the two hostile nations. The US and North Korea have ramped up their rhetoric about one another as Pyongyang continues to develop its nuclear weapons program.

Asked if the President's tweets indicate he has decided to abandon the diplomatic track on North Korea, a senior administration official told CNN: "We are still committed to a diplomatic approach."

State Department spokesperson Heather Nauert tweeted about the US channels to the North Korean government shortly after Trump's tweets Sunday.

"#DPRK will not obtain a nuclear capability," Nauert tweeted. "Whether through diplomacy or force is up to the regime @StateDept."

"Diplomatic channels are open for #KimJongUn for now," she added. "They won't be open forever @StateDept @potus."

Trump has sent similar tweets complicating diplomatic efforts in the past on issues such as Qatar's regional isolation over accusations that it supports terrorism and the future of NATO.

Tillerson and Defense Secretary James Mattis have said the goal on North Korea is to reach a diplomatic solution between the countries, and after the pair briefed members of Congress in closed-door meetings in September, some Democrats noted the difference between their assessments and the President's words.

"I feel like we still have two different polices on North Korea: one at the Department of State and Department of Defense, and another on the President's Twitter feed," Sen. Chris Murphy, a Connecticut Democrat, said after the briefing.

In August, Mattis stressed the importance of the nation's diplomatic efforts, particularly through the United Nations, but in September he warned the US would meet threats from North Korea with "a massive military response."

Last month, North Korea conducted its sixth nuclear test and in recent months it has launched missiles multiple times, which experts say could reach the mainland US.

In early August, Trump warned the US would rain down "fire and fury" on North Korea, saying the US would destroy the nation of some 25 million people if its dictator's threats against the US and its allies continued.

Trump delivered a speech to the United Nations in September in which he referred to the North Korean dictator as "rocket man," an insult he has used several times, including in Sunday's tweets.

North Korea responded to the insult at the UN in kind, with Kim saying, "I will surely and definitely tame the mentally deranged US dotard with fire."