Trump to Khizr Khan: 'I've made a lot of sacrifices' 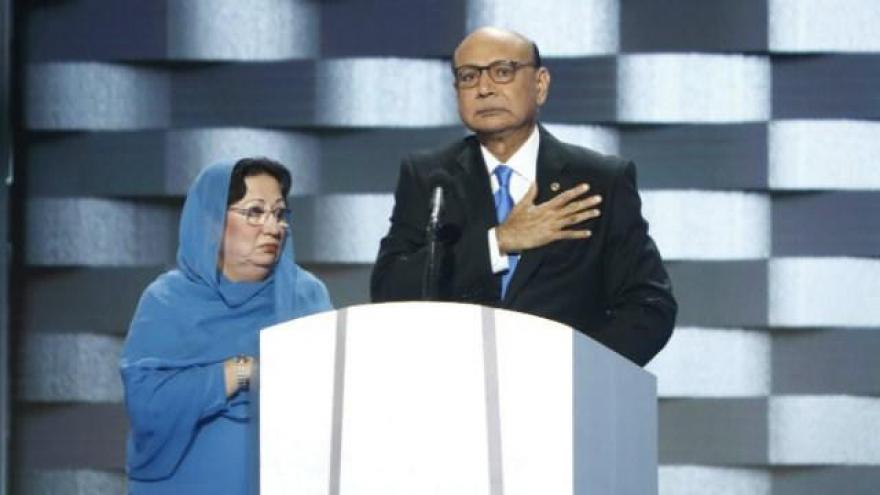 (CNN) -- Donald Trump rejected a Muslim lawyer's assertion on the Democratic convention stage that the Republican nominee has "sacrificed nothing and no one."

"Who wrote that? Did Hillary's script writers write it?" Trump said in an interview with with ABC News' George Stephanopoulos that will air Sunday. "I think I've made a lot of sacrifices. I work very, very hard."

Khizr Khan, whose son Army Capt. Humayun Khan died in Baghdad in 2004, delivered one of the most powerful speeches of the Democratic National Convention. With his wife Ghazala at his side, Khan repeatedly blasted Trump's immigration proposals -- specifically those aimed at barring Muslims -- and said the billionaire businessman has "sacrificed nothing and no one."

Khan "was, you know, very emotional and probably looked like a nice guy to me," Trump added.

Trump, in a statement released Saturday by his campaign, called Capt. Khan "a hero to our country and we should honor all who have made the ultimate sacrifice to keep our country safe."

He argued that the "radical Islamist terrorists who killed him and the attempts by such people to enter the United States and "do us further harm" represent the "real problem."

During his appearance at the Democratic National convention, Khizr Khan held up a copy of the U.S. Constitution and asked Trump if he has ever read it.

In his statement, Trump took sharp offense, saying that "while I feel deeply for the loss of his son, Mr. Khan who has never met me, has no right to stand in front of millions of people and claim I have never read the Constitution, (which is false) and say many other inaccurate things."

Still, a senior spokeswoman for the Clinton campaign, Karen Finney, took a sharper tone against Trump.

"Trump is truly shameless to attack the family of an American hero. Many thanks to the Khan family for your sacrifice, we stand with you," tweeted Karen Finney, a senior spokeswoman for the Clinton campaign.

By Saturday afternoon Trump's comparison of his own sacrifices to Khan's had blown up on Twitter into a hashtag, #TrumpSacrifices. Users wrote satirically that the candidate had, among other things, been subjected to such hardships as flying commercial, playing golf on a public course and staying at a three-star hotel.

"I'd like to hear his wife say something," Trump said.

In a Friday evening interview on MSNBC, Ghazala Khan spoke briefly about her final interaction with her son, on Mother's Day 2004, wishing him safety while serving in Iraq.

In the New York Times interview, Trump also opined on a range of Democratic convention speakers. He was sharply critical of former New York City Mayor Michael Bloomberg, an independent who threw his support behind Hillary Clinton and spoke to the Democratic convention. Trump called Bloomberg "a guy who didn't have the guts to run for president."

"He doesn't know anything about me," Trump said. "But he never had the guts to run. He probably wished he did but he didn't. He spent millions of dollars on polling but he was missing one thing: guts."

The two have been exchanging barbs this week after Bloomberg, who once considered entering the 2016 race as an independent, endorsed Clinton over Trump last weekend, then blasted Trump as a "dangerous demagogue" in Philadelphia.

As for President Barack Obama's speech, which was laced with warnings about electing someone like Trump, the Republican nominee said it was "a good speech but not nearly as good as the press would have you believe."

Still, in a rare moment of praise for the commander in chief -- whom Trump has labeled "the most ignorant president" in history -- Trump said that in "many ways," he does "like" Obama.

"It's hard to define. There's something about him I do like. I'm embarrassed to admit it. I give him a lot of credit," Trump said. "It's very unique and very hard to do and I give him tremendous credit. He became a two-term president of the United States. He's got some quality going."