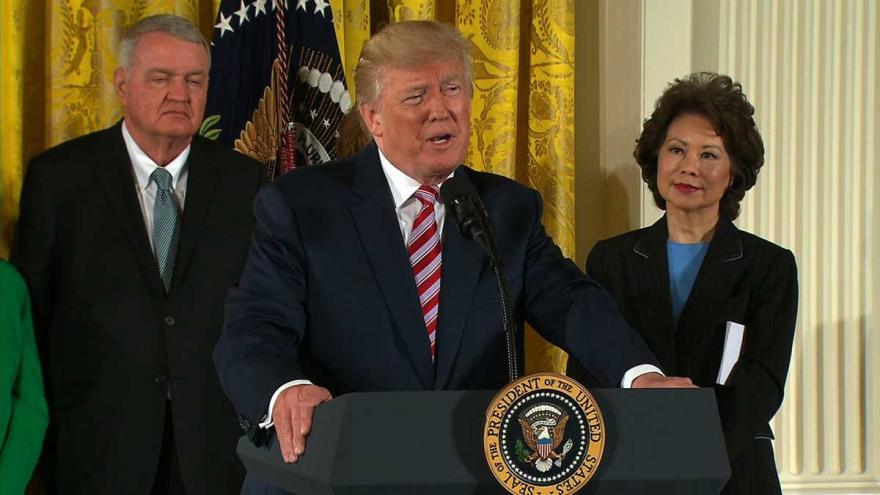 NEW YORK (CNNMoney) -- The Trump administration wants to turn over control of the nation's skies to private business.

President Trump is set to announce plans Monday to privatize the nation's air traffic control system, arguing that it is the best way to modernize the system.

"It's a system where everyone benefits," said Gary Cohn, Trump's chief economic adviser, who briefed reporters on the plan last week. He said that privatizing the system would help speed up the shift from a land-based radar system to a more precise GPS-based system. That would save time for passengers, and reduce costs and fuel consumption for airlines, which in turn could lower the price of oil. There has been proposal for years to move to such a system but the FAA has yet to move on it.

Privatization has long had strong support among the nation's airlines, and has been advocated for years by Republicans, who typically favor it over big government. And it's not just something that has support on the far right. In fact Canada, which typically has a more liberal government, privatized its own air traffic control system in 1996. Other countries including Australia, Germany, New Zealand, and Switzerland have followed suit.

But at a congressional hearing earlier this year, Democratic lawmakers pointed to customer service horror stories at the nation's privately-held airlines, such as the passenger that was dragged off a United Airlines flight and massive computer problems that ground thousands of flights. They argue these problems are proof that private business should not be trusted to do what's right for passengers.

The air traffic control announcement Monday is the start of a "infrastructure week" planned by the Trump administration. Trump has repeatedly promised to spend $1 trillion on infrastructure to improve airports, highways and other forms public works, though details of those plans have yet to be revealed.