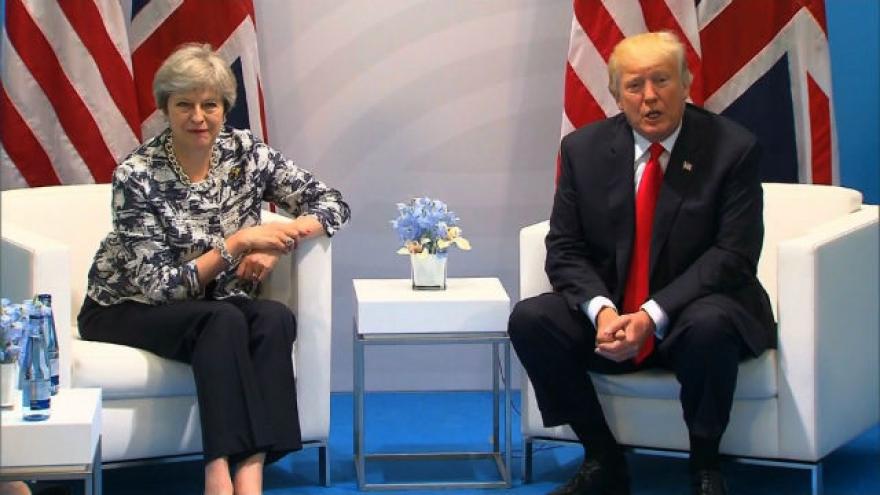 President Donald Trump met with British Prime Minister Theresa May at the G20 meeting in Hamburg, Germany, confirming that the two countries are currently working on a trade agreement. Photo courtesy POOL

By Antoine Sanfuentes and Angela Dewan

HAMBURG, Germany (CNN) -- US President Donald Trump said he expects a "powerful" trade deal with the UK "very, very quickly," confirming that the two countries are currently working on an agreement.

Trump made the comments Saturday as he met with British Prime Minister Theresa May at the G20 meeting in Hamburg, Germany. The US President also confirmed he would visit London, but didn't give details of the timing.

May is looking to secure a deal with the US as Britain renegotiates its terms of trade with the European Union ahead of Brexit -- its withdrawal from the 28-nation bloc. Trump is also looking for high-value bilateral deals as he threatens to pull the US out of multilateral trade agreements, including NAFTA.

"We're working on a trade deal, which will be a very, very big deal, very powerful deal, great for both countries, and I think we'll have that done very, very quickly," Trump said.

"We've had tremendous talks. There's no country that could possibly be closer than our countries and for a long time," he said, adding that he and May had developed "a very special relationship" and that trade would be big factor between their countries.

May said she was looking forward to building on the "special relationship" between the US and the UK, particularly in terms of trade.

But her language on a deal with the US was notably more modest than Trump's.

The UK can't sign new deals with other countries until it leaves the EU, so an agreement with the US is unlikely to happen before 2019 -- Brexit talks are expected to take around two years.

Equally, the US will unlikely want to ink a deal until the UK's post-Brexit terns of trade are clear. The US will want to know what access its companies and banks in Britain will have to the rest of the EU.

Trump: 'We'll be going to London'

Speaking to reporters, Trump also confirmed he would visit the British capital, putting an end to speculation that the trip may have been quietly scuppered due to a backlash in Britain among the public and lawmakers.

When asked about timing, he responded: "We'll work that out. We'll be going to London."

May invited Trump to the UK on behalf of the Queen during her visit to Washington in January. May was the first leader to officially visit Trump, but the prime minister faced a barrage of criticism upon her return by MPs who questioned whether Britain should develop such a close relationship with the controversial leader.

The speaker of Parliament's House of Commons made clear he would not invite the President to address MPs, and a petition calling for Trump's official visit to be canceled gained more than 1.8 million signatures.