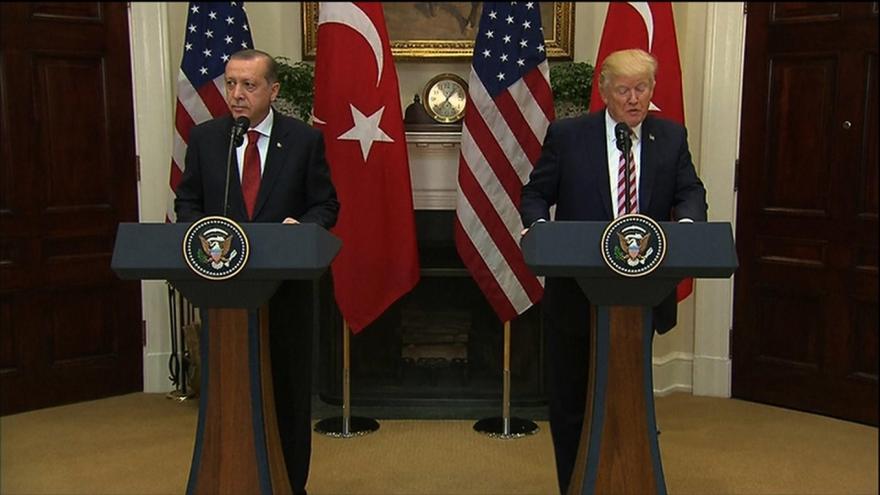 WASHINGTON (CNN) -- President Donald Trump, in hosting Turkey's President Recep Tayyip Erdogan at the White House Tuesday, extended his latest warm welcome to an authoritarian-style leader who had a strained relationship with the previous US administration.

"We've had a great relationship and we will make it even better," Trump said in the Oval Office as he sat beside Erdogan. "We look forward to having very strong and solid discussions."

Despite Trump's greeting to the Turkish leader, the relationship has been strained by the US refusal to extradite a Turkish cleric living in Pennsylvania whom Erdogan blames for orchestrating a July coup attempt against him.

And the two countries are at odds over Trump's decision to arm Kurdish militias that are helping in the fight to rout ISIS from its Syrian stronghold in Raqqa. Turkey sees these militias, which are widely seen as the most effective fighting force on the ground, as an extension of the outlawed Kurdistan Workers Party, or PKK, which is considered a terrorist group in the US, Turkey and Europe.

Erdogan repeatedly stressed the start a new era in close US-Turkey cooperation in fighting terrorism as well as building economic and trade ties, saying that he and Trump were "laying a foundation of a new era of relations between our two countries."

But he didn't pass up the opportunity to register his unhappiness about the cleric Fethullah Gulen, now living in Pennsylvania, or about the US supplying arms to the Kurdish YPG group that's helping Syrian rebels fight IS.

Erdogan is in Washington to try to convince the US President to reverse the decision to arm the Kurdish fighters and to brief Trump on a proposed peace plan for Syria that Ankara has reached with Russia and Iran, and involves the creation of four de-escalation zones within the country.

Turkey, a NATO member, is a vital ally in the fight against ISIS, allowing the US to use its Incirlik air base in the fight against the terror group. Relations were strained, if businesslike, for the last few years as the Obama administration distanced itself from Erdogan's increasingly authoritarian rule.

A bipartisan group of lawmakers wrote Trump Tuesday to ask him to raise human rights with Erdogan, given the increasing repression in his country. They cited the weakening of democratic institutions, stifling of fundamental human rights, mass arrests and civil society restrictions that have been taking place even before a constitutional referendum in April gave Erdogan increased powers and extended his time in office.

"Erdogan and his allies have mounted an assault on the rule of law, particularly using sweeping state of emergency authorities to stifle fundamental rights including free speech, undermine the independence of the judiciary, and quash any opposition to their undemocratic actions," said the letter signed by Florida Republican Sen. Marco Rubio, New Jersey Democratic Sen. Robert Menendez and 15 others senators.

Trump didn't touch on any of the disagreements and instead praised Turkey's efforts in the war against ISIS and for its fight against internal terrorist attacks. He stressed that the US would "offer our support to Turkey" in its fight against terrorism and that they would "reinvigorate our trade and commercial ties."

"These are areas where we can rebuild our relationship," Trump said.

Trump was one of very few world leaders who called Erdogan to congratulate him on winning the referendum, which was preceded by widespread arrests of his opponents and was so narrowly won that many questioned its legitimacy.

All Trump's interactions with Erdogan are overshadowed by his family's business holdings in the country. In a 2015 interview with Breitbart News, Trump told Steve Bannon -- now his adviser -- that "I have a little conflict of interest because I have a major, major building in Istanbul."

During the presidential campaign, when Trump was calling for a ban on Muslims entering the country and floating the idea of a Muslim registry, Erdogan called for the then-candidate's name to be removed from Istanbul's Trump Towers, saying Trump had "no tolerance for Muslims."