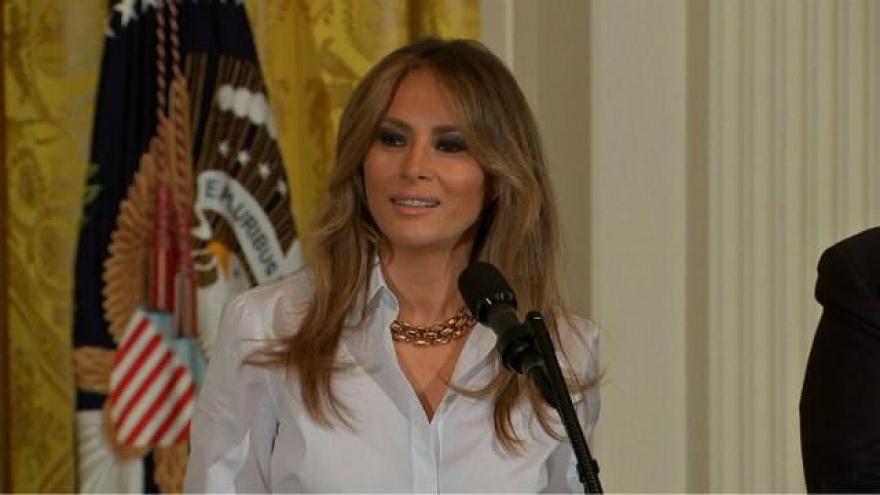 The Trumps welcomed service members, spouses and mothers to the East Wing for remarks and a performance by the Army Chorus and the Marine Band.

"This is one of the many opportunities for us to thank the incredible military mothers who love and care for our nation's heroes, and they are heroes, so thank you very much, and the mothers are heroes, too," Trump said. "It is your sacrifice that protects our nation safeguards, our liberties and makes sure our beautiful American flag always waves proudly above our very glorious land."

As the mothers, spouses, and service members nodded, Trump made a vague reference to some of the tensions of the week.

"I see you shaking your head, yes, yes, yes. That's different than we watch on television every once in a while, that reaction, right? I like your reaction," he said.

He also offered some praise for the first lady, mother to their son Barron, 11.

"She has become so popular, it's true. It's true. In fact, I'm going to have to ask her how are you doing this but our first lady, they had a poll that came out, she went through it like a rocketship. I said, 'How do you do this?' And that's only because people have really gotten to know her," he said, calling his wife an "incredible woman."

"I, too, am a mother. However, I have no idea what kind of different challenges each of you must face as the parent of a soldier. And while you stand with many other parents so strong and so proud, I am sure that you sometimes march on this journey alone," she said.

"While your sons and daughters are away serving so selflessly, having a community share even some of that burden must make all the difference in the world. I want you to know you're among that community today and we are all so proud to be part of it with you. I also want to say thank you for all that you do for your selflessness and for your own sacrifice on behalf of our country," she said.

The first family will be celebrating Mother's Day at the White House, East Wing communications director Stephanie Grisham confirmed. She declined to provide details on their plans.

"All Sundays are special, but this Sunday is very, very special," the President said as he left the event.