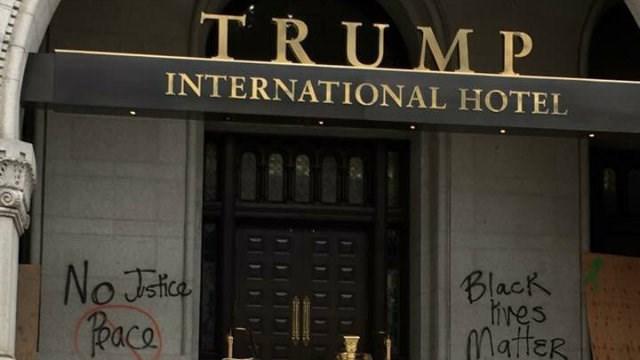 WASHINGTON (CNN) -- Donald Trump's new Washington hotel was vandalized Saturday with spray-painted messages of "Black Lives Matter" and "No Justice No Peace" on its front entrance.

The vandalism comes in the heat of a racially charged presidential contest. Hillary Clinton, who has met with Black Lives Matter protesters, said in their presidential debate last week that Trump "has a long record of engaging in racist behavior."

She also famously declared that half of Trump's supporters are part of a "basket of deplorables" -- including racists.

Trump, meanwhile, has inflamed racial tensions by retweeting false crime statistics about African-Americans, comparing largely black inner cities to Afghanistan and claiming that African-Americans face their worst conditions "ever, ever, ever."

He also rose to political prominence by pushing birtherism -- the bogus and racially-fueled theory that President Barack Obama was born outside the United States.

The graffiti was reported to police at 4 p.m. Saturday, said Metropolitan Police spokeswoman Aquita Brown. The graffiti is now being covered up with plywood, and no arrests have been made.

Patricia Tang, director of Sales and Marketing at Trump International Hotel, declined to comment on the graffiti. The Trump campaign did not immediately respond to a request for comment.