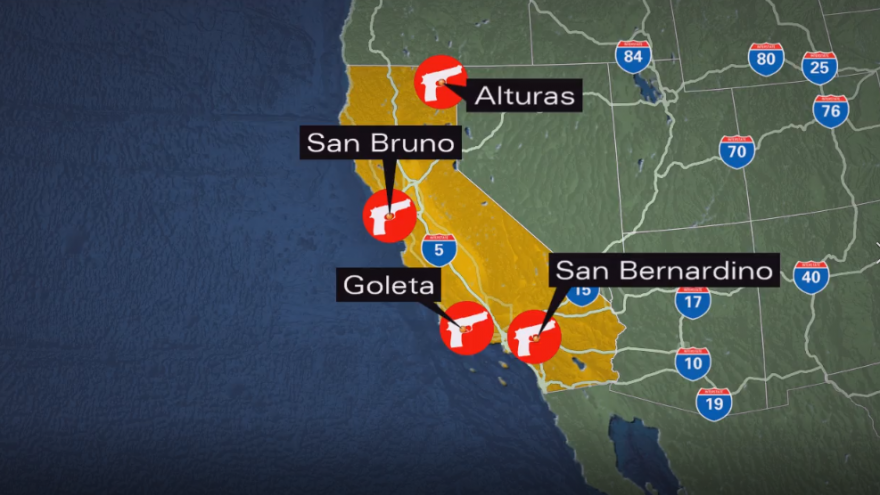 SAN BRUNO, Calif. -- The United States is no stranger to mass shootings, but Tuesday's shooting at the YouTube headquarters in San Bruno, California was different. The person pulling the trigger was a woman. It wouldn't stand out, if it wasn't so rare.

In the last 50 years a woman has been behind the trigger of a public mass shooting only four times -- all in California. We looked at several data bases of mass shootings including ones done by Mother Jones and The Washington Post. .

The most recent was San Bernardino in 2015 when Syed Rizwan Farook and Tashfeen Malik shot and killed 14 people and injured several others during a work Christmas party at the Inland Medical Center. Both were killed in a shootout with police after they escaped from the scene.

A year before that in Alturas, California Cherie Rhoades was convicted of killing four people during a 2014 tribal meetnig. Rhoades was a former leader of a Native American tribe. The meeting was to consider her eviction from the tribe. Rhoades was sentenced to death in 2016.

In 2006 in Goleta, California Jennifer San Marco shot and killed her neighbor before driving to a mail processing facility where she once worked. There she killed 6 other people and herself. According to investigators, San Marco apparently believed she was the target of a conspiracy centered at the facility.

Then Tuesday in San Bruno, a fourth woman shoots several people inside the YouTube headquarters. Police have identified her as Nasim Aghdam. She is said to have no relationship with anyone in the YouTube facility.

Sources tell ABC7 News in San Francisco that Aghdam has an alleged website with a manifesto that targets YouTube for censorship and demonetization of her video content.