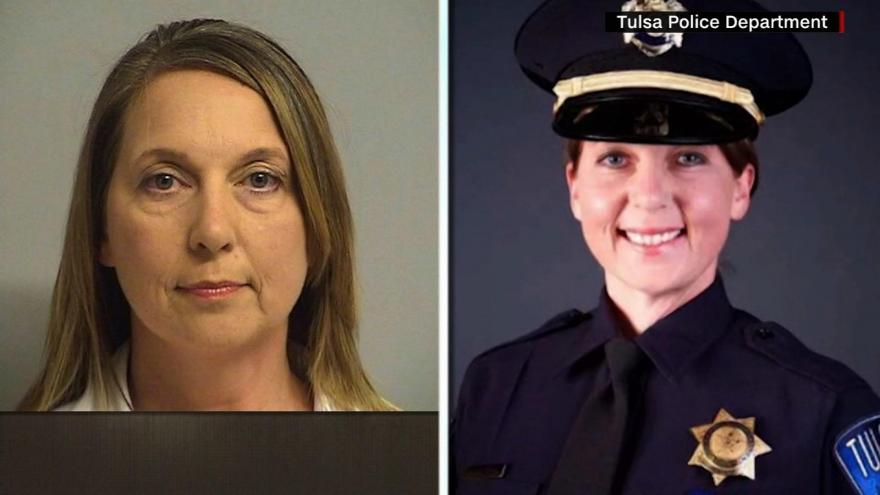 TULSA, Oklahoma (CNN) -- Moments before she killed an unarmed man, Betty Shelby had no idea what he may have been reaching for, the Tulsa police officer testified Monday.

Police helicopter footage showed the man, Terrence Crutcher, with his hands in the air as he walked toward his broken-down SUV in September 2016. Crutcher nears the driver's side door, and part of the camera's view is obscured.

By the end of the video, Crutcher is on the ground with a large bloodstain on the front of his T-shirt.

The decision to shoot Crutcher, who was acting bizarrely and repeatedly failed to obey commands, stemmed from Shelby's police training, the officer testified during her manslaughter trial Monday.

When suspects are able to reach inside of their car, they can "pull out a gun and kill you," Shelby said. "If you hesitate or delay, you die."

But it's unclear whether Crutcher was reaching for anything. An attorney for his family has said his window was up.

Now, an Oklahoma jury must decide whether Shelby should be convicted of first-degree manslaughter. Here's what we know about the case, and what's at stake:

The deadly encounter started when Crutcher's SUV broke down on September 16 of last year. Two other drivers called 911, reporting a man running away from the SUV and saying it was going to blow up.

Shelby was the first officer to arrive. She asked Crutcher about the SUV, including whether it was his, but got no response.

At one point, Crutcher puts his hands in the air unprompted, Shelby's attorney Scott Wood said. He said Crutcher continued to ignore Shelby's questions, walked toward the back of the police car and put his hands in his pockets.

Shelby drew her gun and ordered Crutcher to get on his knees, which he refused to do, Wood said.

Instead, police helicopter video shows, Crutcher walked toward his SUV with his hands back up in the air.

That's when the stories diverge.

A Tulsa police spokeswoman said the officers on the ground thought Crutcher had reached into the driver's side window of his SUV.

But Benjamin Crump, an attorney representing the Crutcher family, said Crutcher's window was rolled up, making it unlikely he was reaching into the car.

Crutcher's death reignited chants of "Black Lives Matter" after he became the latest in a series of unarmed black men killed by police across the US in recent years.

Shelby told CBS' "60 Minutes" last year that Crutcher wasn't belligerent and didn't show any aggression. But she said that "race had nothing to do with my decision-making" to shoot.

She said Crutcher ignored her orders to get on his knees and continued walking to the SUV, even though she had drawn her gun. Shelby said even though Crutcher's hands were in the air, he kept looking back at her. She said she believed Crutcher would harm her.

Shelby told "60 Minutes" she "could very well be dead" if she had waited to find out if Crutcher had a gun.

"There's something that we always say," the officer said: " 'I'd rather be tried by 12 than carried by six.' "

But Crutcher's twin sister, Tiffany, said her brother's death is another example of unnecessary police brutality. She called the decision to charge Shelby a "small victory."

"The chain breaks here. We're going to break the chains of police brutality," Tiffany Crutcher said. "We know the history."

If convicted, Shelby could face between four years and life in prison.