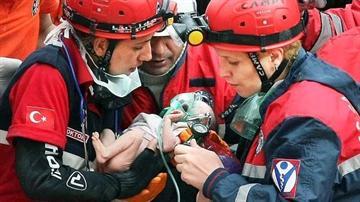 A rescue worker in the eastern city of Ercis was seen on Turkish NTV handing the baby over to a medic. The baby, named Azra Karaduman, was rescued from a seven-story apartment building that collapsed on Sunday after a powerful earthquake crippled parts of the country, including the towns of Van and Ercis.

Shortly after the baby was removed, rescuers dove into the rubble and pulled out the baby's 25-year-old mother, who was sent to a nearby hospital. The child's grandmother was extracted next from the crumbled apartment building. Their condition were unclear, as was the fate of the father and 15 to 20 others believed to be trapped in the debris at that one site.

The death toll from the devastating earthquake has now risen to 366, with 1,301 people injured, officials said Tuesday.

According to a statement released by the Disaster and Emergency Administration, the quake that struck Turkey's Van province Sunday afternoon has caused 2,262 buildings to collapse.

In the towns of Van and Ercis crews of rescuers and civilians continue to use everything from back-hoes to bare hands to dig for survivors. Five people were brought to safety on Monday, including two children and a man who used his cell phone to lead searchers to his location.

Yalcin Akay called a police emergency line after suffering a leg injury and getting buried underneath the rubble of a six-story building, the Associated Press reported. .

Four others included two children who were rescued from the same building and a 21-year-old woman who had been trapped for about 27 hours. .

The Turkish Interior Minister Idris Naim Sahin Sahin said that 80 multi-story buildings had collapsed in the town of Ercis, with people trapped in 40 of them. .

The death toll is expected to rise, but not to as many as the thousands as originally thought. .

"There could be around 100 people [in the rubble]," Sahin said. "But we are not talking about thousands." .

The quake's epicenter was in the village of Tabanli, near the city of Van close to the Iranian border, the AP reported. With a population of 75,000, Ercis was the hardest hit by the quake. About 55 miles south, Van also sustained major damage. Turkey is highly susceptible to earthquakes as it sits on major geological fault lines.

The quake, which hit at 1:41 p.m. local time Sunday, was upgraded from a preliminary magnitude of 6.6 to 7.3 magnitude. The U.S. Geological Survey later revised the magnitude to 7.2.

The depth of the epicenter was considered shallow -- 12.4 miles, shallower than the earthquake that devastated Haiti in January 2010 -- and more potentially destructive, combined with the poor building codes in the region.

According to the Hakki Erskoy with the Turkish Red Crescent, there were at least 120 aftershocks on Sunday. Erskoy said that the high number aftershocks isn't affecting the search and rescue efforts, as most of the families have moved from their homes and settled in tents.

Residents spent the night outdoors and lit campfires, while others sought shelter with relatives in nearby villages. Most of these buildings in the affected part of Turkey are not built up to a code that would protect against

earthquakes. Turkey does have fairly stringent building codes but a lot of the buildings are just ignored or they are not enforced. It is estimated that only one-third of buildings in Turkey comply with codes.

The last major earthquake to hit the country was in 1999, when 18,000 people were killed, according the AP.