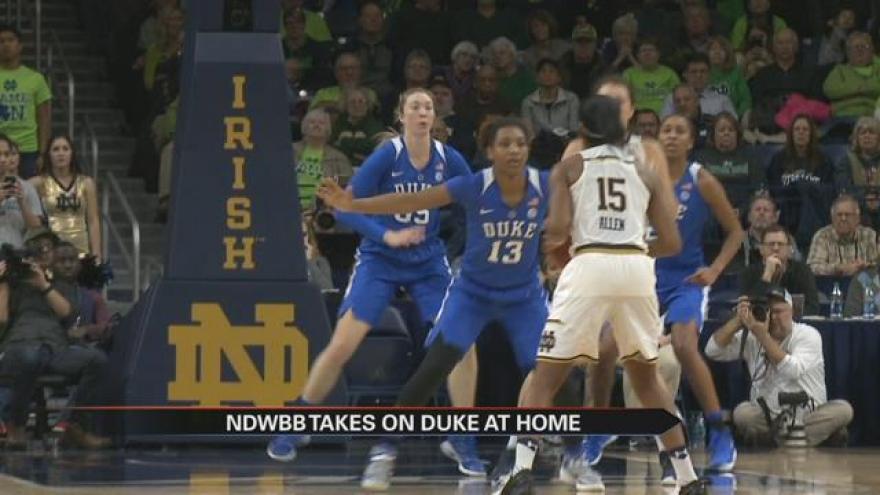 Westbeld had not even so much as practiced since injuring her right ankle in practice on Jan. 18. She was considered a game-time decision tonight but started and played 26 minutes on that bad wheel, scoring six points, adding an assist and two steals while producing the fourth quarter spurt which sealed the victory before a fervent 8,309 fans.

The Irish were up by seven points, 58-51, at the 4:50 mark when Notre Dame got the ball off of a Duke turnover, one of 11 in the second half for the Blue Devils. The Irish took the shot clock down to zero before Marina Mabrey launched an off-mark 3-pointer but Westbeld grabbed the offensive rebound. Again, Notre Dame took the full 30 seconds off of the clock with Mabrey trying a three from the corner but this one would clank off of the rim with Westbeld again retrieving the carom. Finally, at the 3:29 mark, Westbeld, with a lay-up, finished a 1:21 clock-draining possession she had prolonged twice offensive rebounds and left the Irish with a nine-point cushion.

"It was an awesome boost for us," Turner said of the Westbeld rebounds. "We were able to extend the shot clock, have long possessions and just keep the ball away from Duke which was the goal. It was crucial for us. (They were) the game-winning plays."

"A Herculean effort," McGraw said about Westbeld's night. "She played through a lot of pain. I'm sure we won't practice for the next of days. Hopefully she'll be able to play Sunday (against Virginia). "Those (rebounds) are momentum killers for the other team. Every time you get an offensive rebound, they get deflated. And then you get another one and they get a little more (deflated). And then you score on it. I think that was such a big turn-around. I think that was clearly the difference in the game."

Notre Dame moved to 19-3 on the year and 7-1 in ACC play, keeping pace with No. 6 Florida State as the league's last one-loss teams. The Blue Devils fell to 17-4 and 5-3 in league play as they suffered their 12th consecutive loss to the Irish.