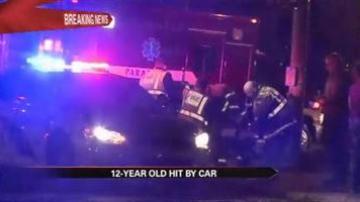 MISHAWAKA, Ind. --  A 12-year-old boy was rushed to Memorial Hospital Monday night after he was hit by a car while riding his bike.

“She did not have time to stop and she smacked right into him,” said witness Monica Laskowski.

Laskowski said she was driving home on Lincolnway West when the boy on a bike darted out in the street in front of the car ahead of her.

“I seen the boy cross the street and I immediately started to slow down, because I knew it was going to happen.  She did not have enough time.  He just flew across the street,” said Laskowski.

Laskowski said they were both driving about 25 mph.  They had the right of way, but the boy tried to cross the street anyway.

“He probably saw the light turn red a distance before thinking he could make it across the street,” said Laskowski.

She said he was pretty banged up.

“His eye was really swollen.  His nose was gushing blood and he said his hip hurt really bad,” said Laskowski.

Medics loaded him on a stretcher and took him to Memorial Hospital.

Meanwhile, officers talked with witnesses and claim it was not the driver's fault.

“She was shaken up.  I mean she was crying hysterically.  I just kept telling her it is not your fault.  I seen it.  I was right behind you. We had the green light,” said Laskowski.