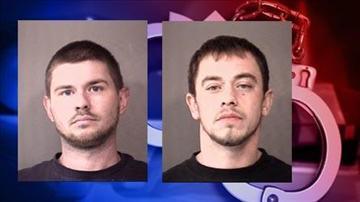 WARSAW, Ind. -- Two people were arrested for allegedly stealing appliances from a home under construction, then attempting to sell those appliances on Craigslist, according to Warsaw Police.

Police say a representative of Stonehill Homes contacted police on October 17 after several new appliances were stolen from a home under construction on Nature View Drive in Harrison ridge addition in Warsaw.

Within a day of the break in at the home, appliances matching the description of those stolen were found listed for sale on Craigslist, reports said.

Police said they recovered the appliances from a home on Deerfield Path in Warsaw the next day.

The owner of the home, 24-year-old Justin Ray Teel, and the person who showed the items for sale, 26-year-old Nathaniel Johnson, were arrested on November 8 and charged with burglary, theft and possession of stolen property.