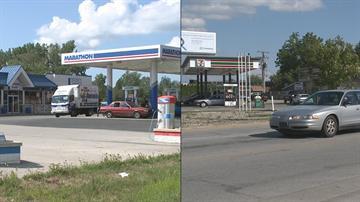 GOSHEN, Ind. – In just two days two Goshen gas stations were robbed at gunpoint and police are asking for the public’s help to find the suspects.

At around 11 p.m. on July 26 the clerk at the Marathon Station at 1149 N. Main Street had just locked the doors for the night and returned to the front counter when he heard gunshots and glass breaking.  Two men wearing masks, one armed with a small handgun, shot out the front door and smashed their way through the broken glass.  They demanded money from the clerk and also took tobacco products.

The clerk said the suspects were 6-feet and 5-feet 8-inches tall, both had an average build and wore dark clothes and masks.

Two-days later on July 28 at 11:45 p.m. two men wearing masks and carrying a small handgun held up the 7/11 station at 2220 Elkhart Road.  The suspects demanded money and stole cash out of the wallet of the only customer in the store before running off.

One suspect in the 7/11 robbery is described as 6-feet tall and thin, the other is 5-feet 9-inches tall and stocky.  Both wore dark clothes and masks.

Goshen Police are investigating both cases, but don’t know if there is any connection between the two robberies.  Anyone with information is asked to call the Goshen Police Department at 574.533.8661 or Michiana Crime Stoppers at 574.288.STOP or 800.242.STOP