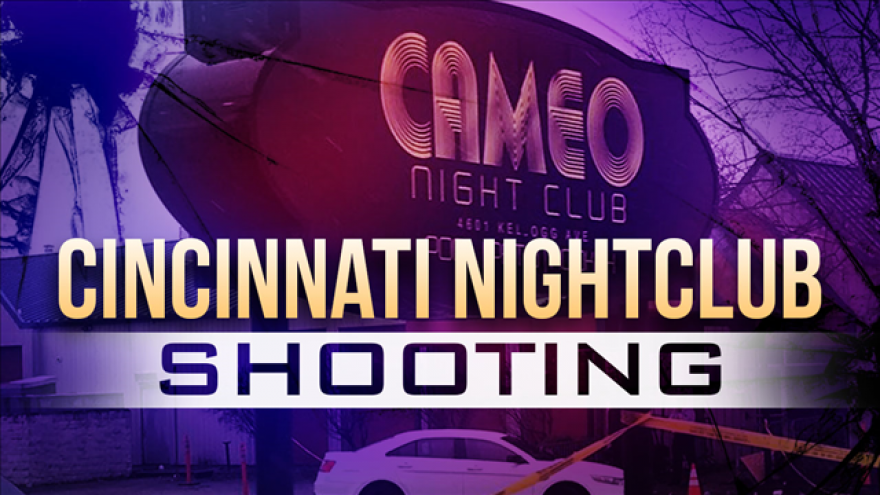 Police believe more individuals may have been involved. They also plan to add charges to the two suspects as the investigation progresses.

One person was killed and 16 others were injured by gunfire early Sunday. Police identified the slain man as O'Bryan Spikes, 27.

Isaac said it was an altercation in the nightclub that deteriorated into a fight, which "escalated to individuals being able to sneak guns into the bar and shots being fired." Police have recovered 16 shell casings, but believe more shots were fired.

Mayor John Cranley said the city must "figure out a way to get the guns off the streets and teach people not to resolve disputes with guns."

Jackie Davis, Deondre Davis' father, was by his son's bedside in the hospital when he learned he was one of the suspects. "We were so excited that they had (arrested) someone and to see my son's face come across was devastating," Davis told reporters outside the hospital. "I'm still puzzled on how my son is accused," he added.

Davis described his son as a "nice, well-rounded kid" who always smiles.

According to his attorney, Carl Lewis, Deondre Davis is unresponsive, sedated and on a ventilator and is expected to undergo surgery on Friday.

"He's innocent until proven guilty," Lewis said. The attorney mentioned he had represented Davis in the past for "minor matters," such as traffic charges for allegedly driving without a license.

It was not clear whether Beckley has an attorney. He is scheduled for arraignment Friday.

The shooting was not related to terrorism, authorities said. But Cranley said that made little difference to clubgoers.

"If you were in that bar or restaurant and people start shooting in a crowded room, what difference does it make to you what the motivation of the shooter was?" Cranley said. "We live in a city and a country where you should be able to go out and have a good time and not be terrorized by gun violence."

Cameo is in the former home of a gay bar called Adonis, which closed in 2012.

It is in the city's East End area, on the Ohio River Scenic Byway near Cincinnati Municipal Lunken Airport, where it sits amid used auto parts yards and marinas.

"We, including myself, are all asking how this could have happened," Jay Rodgers, Cameo's owner, said in a statement. He pledged the club would "continue to cooperate with the police investigation and assist in any way in bringing the perpetrators to justice.

Cameo hires off-duty police officers for extra security. Two officers were stationed at the club's entrance and another two in the parking lot, authorities said.

Officers in those situations are allowed to provide security only outside the clubs, Isaac said. Clubs are responsible for their internal security.

To get in, clubgoers had been searched with an electronic wand to detect hidden weapons.

A man who was inside told CNN affiliate WLWT he heard the DJ calling for security, although the music hadn't stopped.

"It was just a lot of chaos, obviously, when the shots went off," Cincinnati Police Department Capt. Kimberly Williams said. "People (were) just trying to get out of harm's way."

To leave the club, some patrons had to flee past injured people on the floor.

Police found a "chaotic crime scene" as they looked for witnesses, many of whom took off when the shooting started, said Cincinnati Assistant Police Chief Paul Neudigate.

"You had a mass group of people leaving the scene," Winston said.

Some of the injured drove themselves to area hospitals, police said.

One patient was treated for a gunshot wound and released from Anderson Hospital, said Nanette Bentley, hospital spokeswoman. Another person walked into West Hospital with a non-gunshot injury and was treated and released, Bentley said.

'Just going to have a good time'

Cranley, the mayor, said his city is "deeply saddened by this tragedy" and urged community members to work together.

"People were just going to have a good time and ended up getting shot," he said. "That is totally unacceptable."

He added, "This is a tragedy that has struck other communities and now it has struck Cincinnati. Our hearts are broken but our spirit is not."

The Cameo nightclub allows admission to anyone over age 18 on Friday nights. Saturday nights are for those who are 21 and above and promoted as "grown and sexy" night.

Cameo has a history of violent incidents, WLWT reported.

"We are aware of it. It (the club) has had some challenges in the past," Neudigate said.

Multiple assaults were reported at Cameo from 2014 to 2016, affiliate WXIX reported.

CNN's Azadeh Ansari and Eric Levenson contributed to this report.