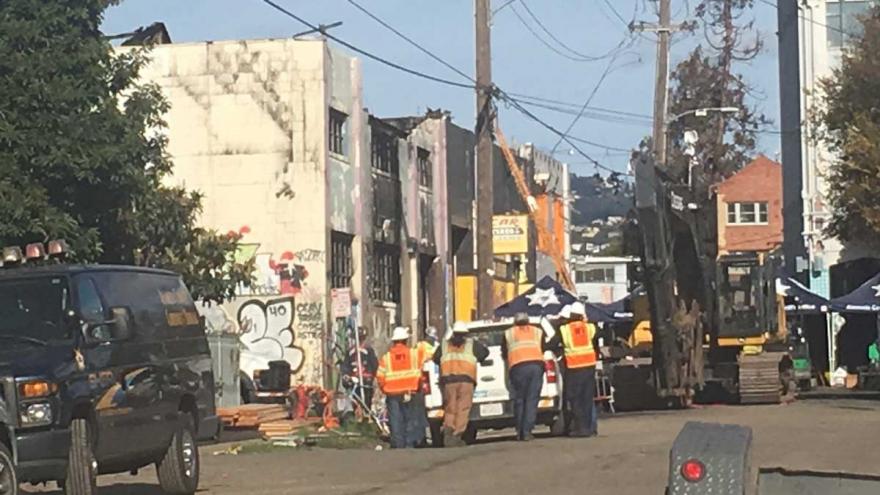 The blaze broke out during an electronic dance party, killing those who could not escape from the dilapidated two-story warehouse.

O'Malley told reporters on Monday that the two men knowingly created a fire trap in the building with no real means of escape. "We mourn the loss of 36 vibrant members of the community who should be with us today," she said.

Almena and Harris face up to 39 years in prison if convicted of all charges. They were arrested Monday.

Assistant District Attorney Teresa Drenick did not provide any additional identifying information about Harris, but CNN affiliate KPIX in San Francisco has described him as a Ghost Ship tenant

Almena at the time apologized to the victims' families and vehemently defended himself, saying he would never have intentionally endangered any of his tenants.

"I'm only here to say one thing: that I am incredibly sorry," he told NBC's "Today."

O'Malley did not file charges at the time of the fire but left the option open pending the completion of the investigation.

Darin Ranelletti, Oakland's interim director of planning and building, told CNN last year the warehouse had not been inspected in 30 years.

"That means we had no applications for permits in the last 30 years, and there were no violations that were submitted for interior work within the main building attributed to that street address," he said.

The most recent complaints were filed three weeks before the fire.

Inspectors went to the property in November to investigate a complaint about blight and an illegal structure in the lot next door, Ranelletti said. The lot has a different address than the warehouse.

Ghost Ship, along with an adjacent lot, had become cluttered with old cars, oil containers, pests and trash, according to complaints.

Many of the complaints were directed at the lot, pointing to a "ton of garbage piling up on the property" as well as the "illegal interior building structure" at the warehouse, according to city records.

Following the fire, the families of victims Griffin Madden and Michela Gregory filed lawsuits against the building owner and employees of various city and county departments. The families claimed they knew the warehouse posed dangers long before the deadly blaze.

Among those who should have been aware of the hazards are members of the Oakland Fire Department who "attended and held a music event" there prior to the deadly fire, the lawsuits say without elaborating. The lawsuits note that the nearest fire station is about a block away.

In addition to claims against Oakland and Alameda County, the Maddens and Gregorys targeted building owner Chor Nar Siu Ng and landlords Micah Allison and Almena.

The lawsuits also name as defendants a promoter, a California-based music label, a Madison, Wisconsin-based musician and two landlords of nearby properties who "provided utilities and services to the Ghost Ship, including a supply of electricity from their premises and a restroom on their premises for use by patrons and invitees during music and other events."