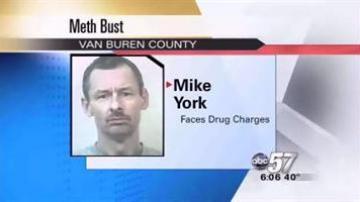 Police from the Van Buren County Sheriff's Office Narcotics Unit received information on a warrant out of Kalamazoo County and went to investigate. When they arrived at a home at 401 W. Arlington St. in Bangor, Mich., they found two different people with outstanding felony warrants: Michael York and a 17-year-old girl.

Police also saw a 29-year-old man in the garage. The man asked if police would get his jacket for him out of a truck. When they grabbed the jacket, a plastic canister fell out of one of the pockets. It was filled with three baggies of meth (totaling 2.9 grams)!

The police report will be forwarded to the Prosecutor's Office for review.