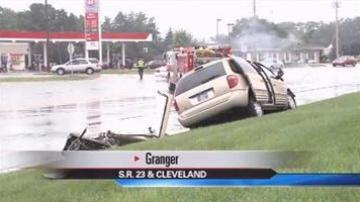 Witnesses say a mini-van hit a van that was transporting a man in a wheelchair.

The collision happened a little before 1 p.m.

Responders had to use the "jaws of life" to get one of the crash victims out of their vahicle.

A witness who lives nearby says the traffic signal is to blame.

"This stoplight, it's the stoplight!  It's not enough notice to stop and go.  This isn't the first time there has been a wreck here, now, but this is the worst," said Sue Bray.

At least one of the people involved in the crash was taken to the hospital.