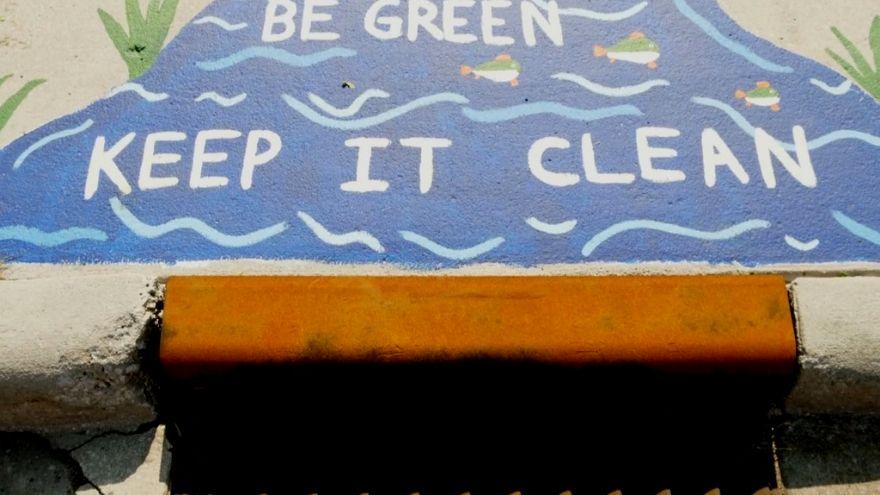 Rachel Weaver is in her 15th year of teaching at Goshen Middle School. She decided to take her art outside of the classroom by adding a “Be Green, Keep It Clean,” sign to a storm drain on S. Indiana Ave.

Weaver shared the project’s message with her sixth grade students, with the hope that they will pay attention to the debris that can build up in storm drains and affect the water supply.

“As recently as this weekend we had such a bad storm and there was so much damage that leaves were blocking the area and we had urban flooding on small streets so anything that goes in there and blocks that will just eventually mess up our area and block our rivers and streams,” Weaver said.

Heather Potsander is going into her eighth year teaching art at Parkside Elementary. While her love of designing optical illusions served as her design inspiration when deciding on her project, Potsander also looked to her young students for ideas.

“I was really thinking of my students when designing this. I was like ‘what would draw them in, what would make them interested’ and they like emojis so my raindrops have emojis on them with all of the different emotions and thinking if you’re going to go down the drain the idea is you could pose with it, would you be scared, would you be excited, kind of like a roller coaster, what kind of emotions would you have,” Potsander said.

Take a look at the video below for a sneak peek at Weaver and Potsander’s work.

Potsander’s storm drain art project on S. 8th Ave. along with Weaver’s design will be celebrated on Friday as part of Goshen’s First Fridays at a public unveiling at the courthouse in downtown Goshen starting at 6:30 p.m.

Ten designs in total were selected earlier in the spring. The artists are all local to Elkhart County, even featuring a group of artists from ADEC.

The project is a partnership between the City of Goshen and My Community Water LLC and works to promote keeping waterways clean.

According to the City of Goshen, storm water is the only growing source of water pollution in the country and most storm drains empty into waterways untreated.

Click here for a map of the storm drain art projects throughout Goshen.