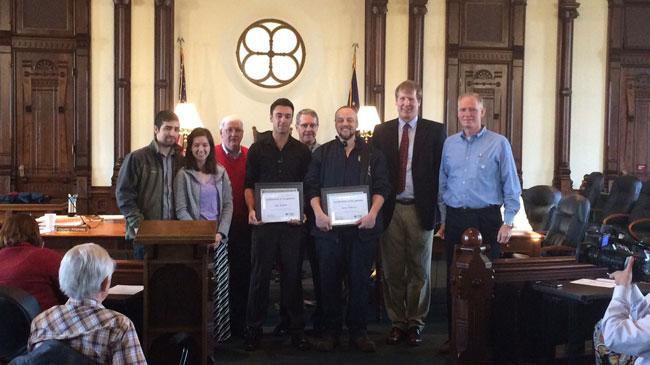 Eleven days after a Grace College student saved their lives on US 30, an Ohio couple returned to Michiana to surprise him and thank him.

Less than two weeks ago, Christa and Jeremy Noland were driving west on US 30 for a wedding in Warsaw.

They said it was an uneventful trip until they were hit by a semi at a stoplight.

"You've got to get out of the car. So I was like ok, and I looked over to my side of the car, and there was like a huge fire so I thought Ok that's not going to work," said Christa Noland.

With a fire on her side of the car, and Jeremy unconscious, Christa was stuck, until Tyler Rothhaar showed up.

"I pulled them out," said Rothhaar.

Rothhaar was driving back to school when he witnessed the crash.

"I just made sure to get out of my truck right away and pull up to see if they were alright," said Rothhaar.

He stopped, as did Chris Willavize, to pull the couple out of the car to safety.

"I was constantly talking to them making sure they were still with me," Rothhaar said.

On Tuesday, they were all reunited in Warsaw when Willavize and Rothhaar were honored by Kosciusko County Commissioners.

"It seems like thank you is not enough," Christa said.

Rothhaar says he could've gone without this certificate.

"I don't think that it should be necessary to give people awards like this because I think everybody should react the way I reacted," said Rothhaar.