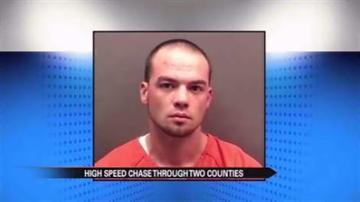 "The front part of the home was engulfed in fire,” said Plymouth Fire Chief Rod Miller.

Firefighters were dispatched around 7:30 a.m.

Firefighters had just arrived on scene when they narrowly escaped injury from a high speed chase.

"That kind of changed the safety dynamics of things for a short bit,” said Miller.

The skid marks are still visible on the road.

Miller said some of his firefighters jumped out of the way and came within inches of being run over.

"He went by the truck and the guard rail and I don't know how he made it but he did- He just fit,” said Miller.

The chase didn't come to an end there. It picked up speed.

"The suspect vehicle was a black Chevy S 10 and had caused an officer to run off the roadway,” said First Sergeant Neil Wallace of the Marshall County Sheriff’s Department.

"Ultimately the vehicle ran off the roadway near 12th and Maple roads,” said Wallace.

The suspect was apprehended shortly after in a corn field.

"We are very lucky today all of the emergency personnel and the public were all fine and no one got injured,” said Wallace.

Novitzke is being held on charges of resisting law enforcement with a vehicle and reckless driving.