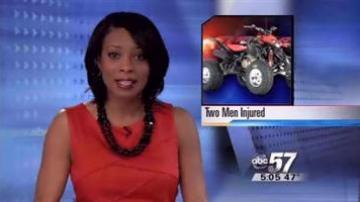 INDIANA – Two men are recovering this morning after they were hurt in two separate ATV accidents over the weekend.

Mark Brubaker, 51, was injured near Peru. Police say as he was clearing a log on his ATV when he had an accident. He was hit in the face with a hook attached to the carrying rack.

In a second accident near Wabash, a 21-year-old lost control of his ATV while doing a wheelie. Don Ray Jr. fell off his ATV and then it rolled over him.

Both were treated at area hospitals.