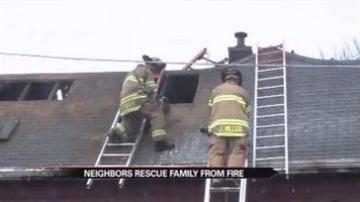 WARSAW, Ind.-- A mother and her 4-year-old son, are recovering after a house fire Wednesday morning. The house is located at the corner of Cook and Clark streets. It took three fire departments and more than 40 firefighters several hours to clear the scene.

“The mother came out and was hollering and the neighbors across the street dialed 911 and got emergency services coming,” said Chief Mike Brubaker, Warsaw Wayne Territory.

Two neighbors who did not want to go on camera, say the mother went back into the burning house and carried out her four year old son who was draped across her arms.

Together they put him on the ground on blankets until paramedics arrived.

"They were scooped up by the ambulance and taken to the hospital,” said Brubaker. “The child was transported to KCH Hospital and then on to Fort Wayne for precautionary reasons."

Chief Brubaker said firefighters from three departments worked for more than three hours to put the blaze out.

"As you can tell we've had to do extensive overhaul on the house because it did get up into the void spaces in the attic,” said Brubaker.

"It was all engulfed in smoke and then ten minutes later the whole block was just covered in smoke,” said Martin.

The Red Cross was on the scene to assist fire crews and the victims.

"Normally we meet with the family at the scene and provide assistance right then, but if they are taken to the hospital as in this case then we connect with them later once their situation is stabilized,” said Bree Robinson of the Red Cross.

The fire chief says the house is a total loss and he believes that the fire started in the kitchen.

As our ABC 57 crew was getting ready to leave the scene Wednesday evening, a boy who lives at the house pulled up with a few of his friends. He told us his four year old little brother is in a Fort Wayne hospital with burns on his forhead and ear. He said his Mom and Dad along with he and his four siblings have lived in the home for the last 11 years. He said his parents do have insurance.