Two more shootings occur along I-69 in Michigan 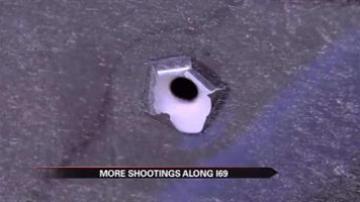 INGHAM COUNTY, Mich. -- There have been two more shootings along I-69 in Michigan.

Multiple bullet casings were recovered from two shootings that happened just miles away from each other and 30 minutes apart.

It is the same area where 22 cars have recently been shot.

The first shot Saturday struck the driver's seat rear window and barely missed the passenger. Fortunately, no one in that car was hurt.

A man was shot in the backside in the second shooting but he is expected to be okay.

Eastbound I-96 is back open after being shut down for several hours.