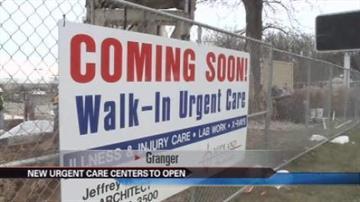 GRANGER, Ind. -- Two new urgent care centers are opening in Granger within walking distance of eath other. The owners said they did not realize their competition was starting up right next door.

Since 2010, Med Point 24 was the only 24-hour urgent care clinic in the area.  But by February 1st, Med Point will have new competition and patients will have more options.

One clinic is opening in Heritage Square, right across the street from Med Point 24, and the other one will be located one block down, where Cleveland Road meets SR-23.

Some say it's overkill, but doctors say all three are needed in Michiana.

"There's a growing trend for urgent care centers throughout the U.S., but in South Bend we have a lot less than what is the average for cities our size." explained Greg Saughter, Business Consultant Manager for the new Doctor's Express in Granger.

Without these centers, people without doctors or insurance flood hospital emergency rooms.

The new urgent care clinics will relieve overcrowded emergency rooms and give patients a much needed alternative.  Residents can understand why Granger is a prime location.

"That's probably why they are moving it to the prominent area where business is booming rather than where it's not." South Bend resident, Dominic Ellis said.

Granger brings big business and a lot of families to the area, but it also has a fair share of college students. Both facilities plan to target students.

"Students in the area, a lot of their needs are short term illness and injury and a lot of them do no have primary care physicians in town so urgent care centers will be ideal for them." said Saughter.