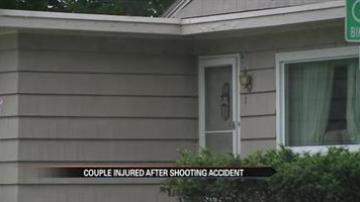 ELKHART, Ind.-- A man was cleaning his handgun when he accidentally shot himself and another woman in their Elkhart home in the 22000 block of CR10 just before 6 p.m. Sunday.

Police said 37-year-old Phillip Vincze thought the bullets were cleared from the gun when he pulled the trigger.

Captain James Bradberry with the Elkhart Sheriff's Department said the bullet went through Vincze's hand before it pierced Jeanette Collins in both her legs.

Jordan Pletcher said, “The first thing we saw was a woman, I guess Jeanette, being put onto a gurney and her legs were up and it looked like she was holding onto her side of her stomach before they put her in the ambulance and then they drove off and another one came and the man was put in there too.”

The victims were taken to Memorial Hospital with non-life threatening injuries.