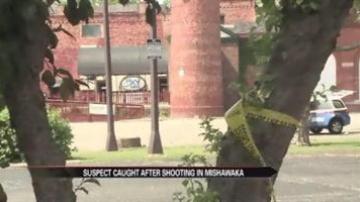 “Officers got in a high speed chase with the suspect that was driving the vehicle away from the scene,” said Tim Corbett, Commander of Metro Homicide.

The suspect fled west on Lincolnway, traveling for over a mile, before eventually crashing into a fire hydrant in front of Kentucky Fried Chicken on Lincolnway.

Once the suspect crashed his vehicle, he still didn’t surrender.

“A short fight ensued and a weapon was pitched at the time. We’ve recovered the weapon, we believe it’s going to be the one used in this shooting,” said Corbett.

Metro Homicide did not release the name of the alleged gunman.