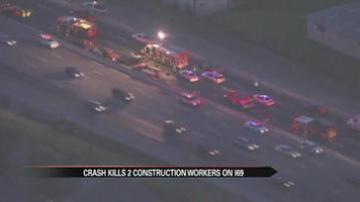 INDIANAPOLIS – Two road construction workers were killed on I-69 near Indianapolis Friday in a work zone. Both victims were from the Indianapolis area, but worked for Rieth Riley Construction of Goshen.

“We extend our sincere condolences to the families of the two construction workers killed today in the I-69 accident,” said Gov. Mike Pence. “This tragedy reminds us that we must slow down and pay close attention in highway construction work zones. Hoosiers must work together to reduce the number of accidents in highway work zones and protect Indiana’s workers.”

It is the first fatality involving an INDOT worker or contractor since 2012.

According to the Indiana State Police, around 5:45 a.m. two workers were finishing up their shift and were removing orange cones.

Jordan Stafford, 22, of Fortville was driving a pickup truck southbound on I-69 when he failed to move over and struck a directional arrow board sign and the two construction workers picking up cones.

Stafford had to be extricated from his pickup. He suffered non-life threatening injuries.

The workers were identified as 49 year old Kenneth Duerson Jr of Indianapolis and 24-year-old Coty Demoss of Noblesville.

The safety manager at Rieth Riley Construction was too distraught to go on camera, but said the entire organization is devastated.

INDOT spokesman Matt Deitchley said this is a tragedy because their deaths were preventable.

“It really hits close to home. For the dangers that are out there on the roadways, we really stress to folks that we understand when you see construction zones it can be frustrating, but we ask you to stop and think, these are people out there with families that want to go home and see those families at night," said Deitchley.

INDOT says they have more crews out working now than ever before because of the damage caused by the brutal winter.

“You’re going to be seeing a lot more mobile crews, crews that are going to be working on sealing those potholes and doing emergency repairs on roads that were trashed by this awful winter we had," said Deitchley.

INDOT is asking everyone to be patient and to slow down in work zones.