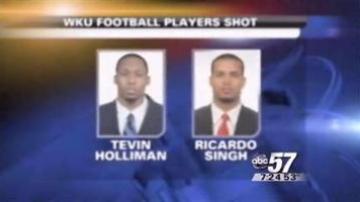 Tevin Holliman and Ricardo Sing were found outside a bar near campus in Bowling Green.

Both players were taken to the hospital and university officials said that their injuries were not life threatening.

Police are still trying to figure out what lead to the shooting.

"We're not sure if there was a disturbance going on in the parking lot, that if it was a fight that ended up turning into something else, we just really don't know that exactly right now"