U-Haul side-swipes semi on toll road, alcohol may have been factor 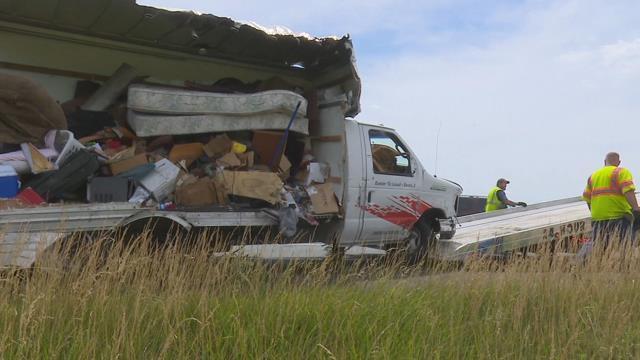 A crash on the westbound side of the Indiana Toll Road near mile marker 66.7 delayed dozens of Michiana drivers for hours Sunday afternoon.

"For a reason we have yet to determine, the driver of the U-Haul veered to the right, side-swiped the side of the semi-trailer and tractor,” Indiana State Police Trooper Tim McCormick said.

A U-Haul struck a semi that was pulled over on the side of the toll road awaiting maintenance around 12:30 p.m. Sunday afternoon, leaving traffic backed up for miles and a big mess to be cleaned up.

“The whole right side of the box on the U-Haul truck was basically sheared off,” McCormick said.

The driver of the packed U-Haul was taken to Memorial Hospital with minor injuries and police say alcohol may have played a role in the crash.

The semi driver was not injured, though both vehicles were knocked off the road and into a nearby ditch.

Cleanup crews spent more than three hours picking up debris and pulling the trucks out of the ditch; clearing the scene just after 3:30 p.m.

State police ask drivers to move one lane over, if you can, when a disabled vehicle is on the side of the road – like you would for an ambulance or police car.

If you can’t, police say you should slow down significantly, like you would for construction.

“Pay attention to signs, reduce your speed and merge over well beforehand,” McCormick said. “That’s what’s causing most of our tie-ups and backups, is when people wait to the last moment to merge over.”

McCormick said this accident was the third he had dealt with Sunday afternoon on the toll road.

He said there are sometimes more accidents in the summer months than in winter because drivers become careless as the weather gets nicer.