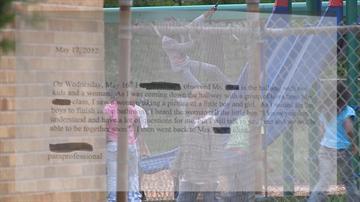 BENTON HARBOR, Mich. – A Morton Elementary School parent claims her children were taken out of class by an unauthorized person and school officials allowed it.

Last Wednesday according to a staff member’s account, a woman took three children out of class, took pictures of them and told them she’d see them again soon.

We were contacted by the mother of the three children… who’s upset with the school and says they aren’t taking the situation seriously.

“I thought it was a safe place for the kids,” said Annette Tillman, mother of four children at Morton.

Tillman said she received a call from the school last Wednesday and was told that a woman was allowed in the school and asked to see three of her adopted children. Tillman was told by the school the woman claimed to be an aunt of the children.

“I take that very seriously because she could have easily walked out the school with one of my kids,” said Tillman.

According to written statement from a Morton staff member, the woman took pictures of the children and told them; “I know you don’t understand and have a lot of questions for me but I will talk to you later and we will be able to be together soon,” read the statement.

Tillman recognized the woman’s name on a visitor pass as a former caregiver of the children five years ago.

Tillman said she was told by the principal April Margaritis that the school was safe and secure. Tillman disagreed, “When people walk in and out of the schools roaming the hallways… that shouldn’t be there it could easily happen to anyone else’s child like it did mine.”

Several calls were placed to Benton Harbor Superintendent Leonard Seawood Monday. No calls have been returned to ABC 57 News as of Monday night.

The Benton Harbor Police Department said the situation is still under investigation and charges may be filed.