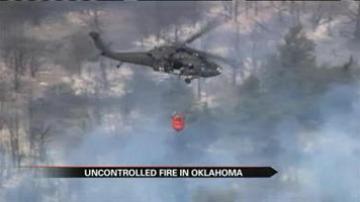 Fast-moving flames north of Oklahoma City are still out of control.

The flames are feasting on thousands of acres of bone-dry Oklahoma brush.

Already the fire has destroyed at least 6 homes with more than 150 still in its path. The fire claimed one life.

"It was a 56-year-old male. He was at his home. It was a mobile home. He was asked by both family and law enforcement to evacuate. He chose not to do so," said Guthrie Fire Chief Eric Harlow.

Hundreds have been evacuated as firefighters from across Oklahoma scramble to keep the upper hand.

The fire chief says the fire started as a controlled burn on private property but it got out of hand.

Now that person can be held financially liable for any damages.