Unexpected tornadoes just outside of Michiana 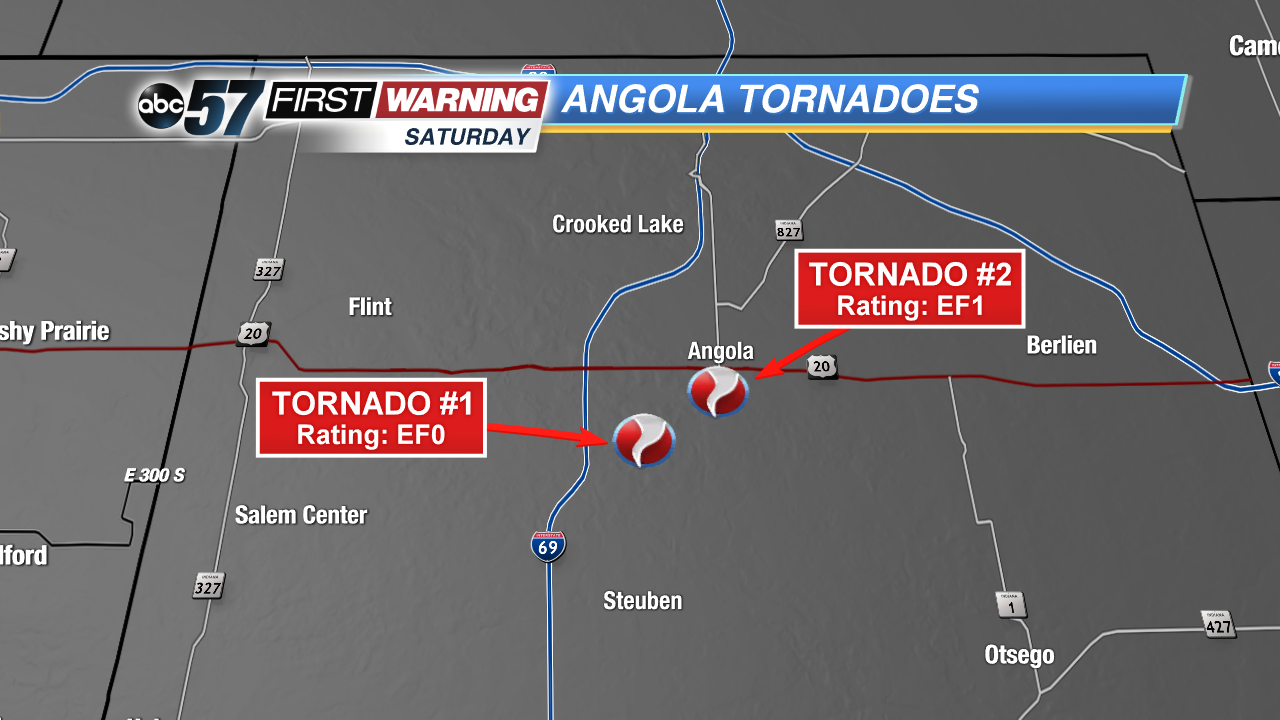 There wasn't much in the way of strong or severe weather in Michiana on Saturday, but just a few miles to the east in Steuben County, the same cannot be said. The National Weather Service in North Webster, Indiana, has confirmed that two tornadoes touched down Saturday evening just outside of Angola, which sits just east of I-69 and south of the Toll Road in central Steuben County. Each of the twisters did cause damage to both trees and structures, but no injuries or fatalities were reported. 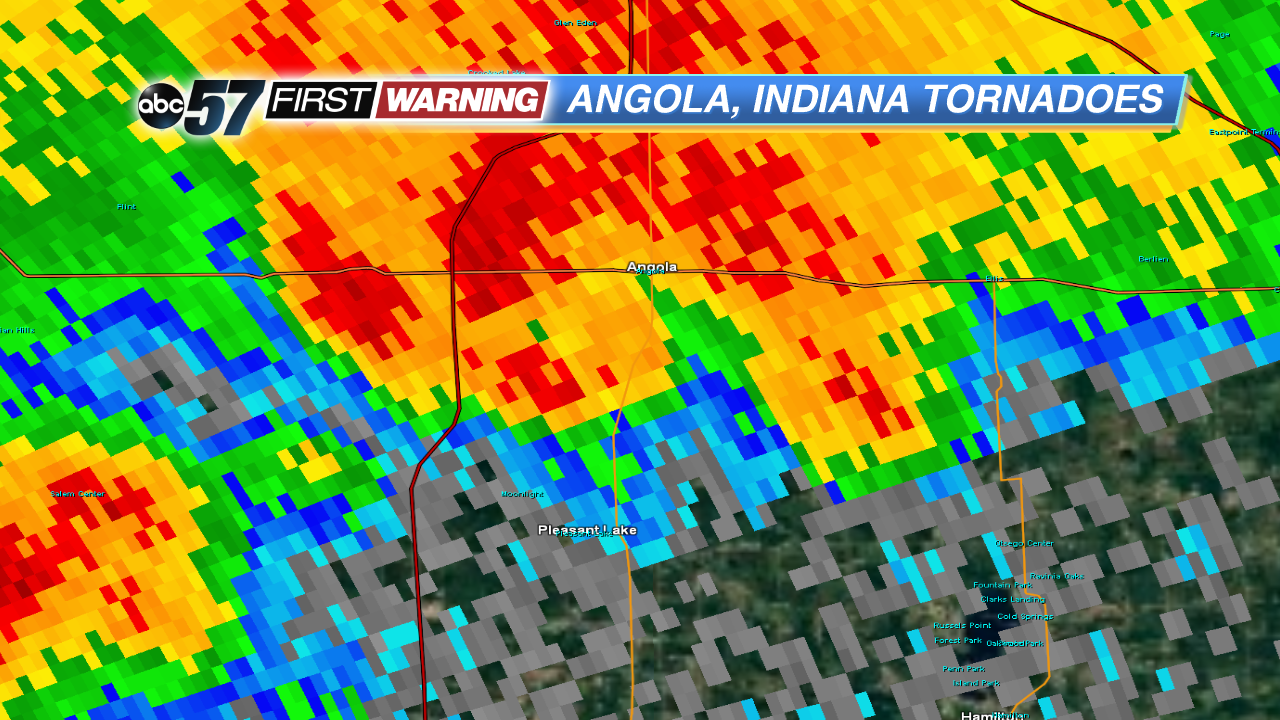 Radar reflectivity while the storm was producing the tornadoes. NWS
The small complex of rain and storms that produced the tornadoes moved along the Indiana-Michigan state line Saturday afternoon, dropping heavy rain and isolated small hail in southern Michigan and northern Indiana near and north of the Toll Road. There was also plenty of lightning and some strong wind gusts associated with the small storm cluster. However, there was no severe weather associated with the activity until it departed LaGrange County and entered Steuben County. In other words, there were no damaging wind, large hail or tornado reports. Even more, there was no severe weather watch in effect, and the Storm Prediction Center did not have far northern Indiana in a risk for severe weather. That's because the environment in place was not very supportive of dangerous thunderstorms. 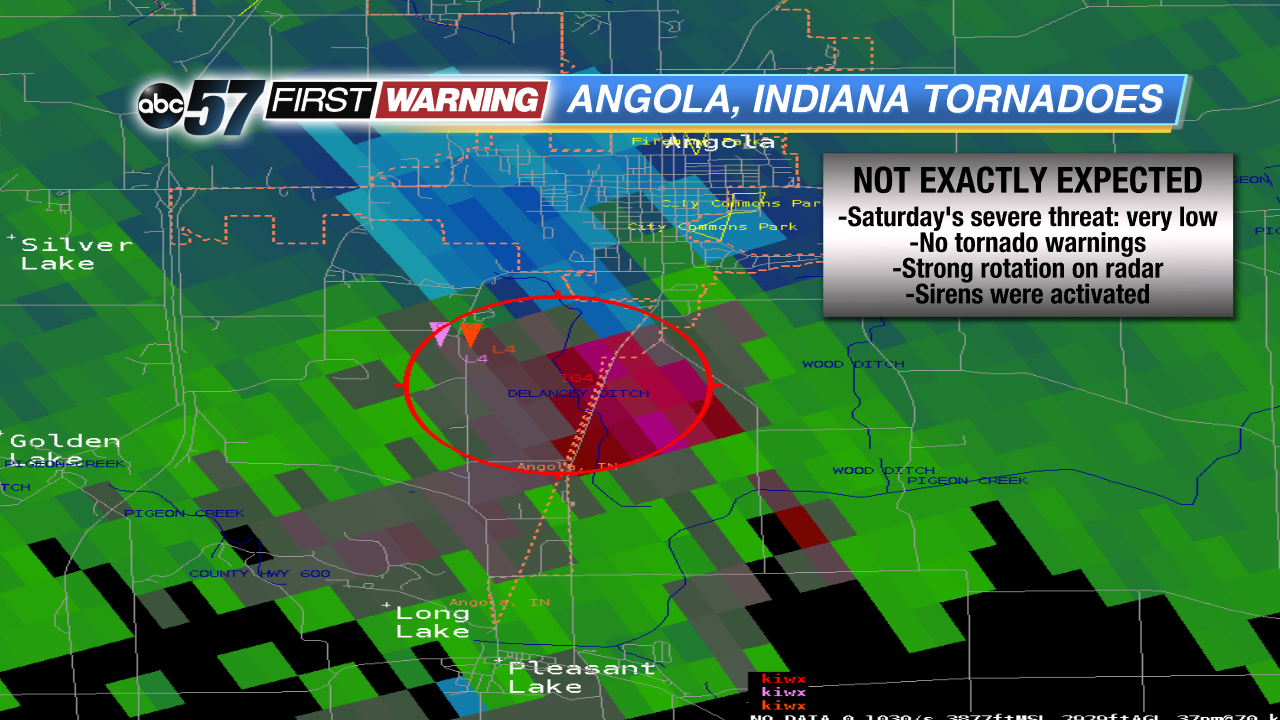 Radar velocity when the storm was producing the tornadic activity. NWS
Nonetheless, as the small cluster of storms moved into the Angola area, it had just enough to work with to spawn both an EF0 and EF1 tornado. The EF0 tornado occurred first and was on the ground for around one minute while producing maximum winds of 80 mph. It snapped and uprooted multiple trees and caused minor damage to a few structures. The EF1 tornado moved just south of downtown Angola and caused what the NWS is calling widespread and extensive tree damage, as well as some structural damage. It was on the ground for six minutes and had maximum winds around 105 mph. Despite its rating as an EF1, it was nearly 375 yards wide at its strongest point!

The radar imagery with the storm was not extremely impressive, and certainly did not scream "severe weather" or "tornadoes." Looking closer, though, the velocity product on radar showed a couplet and tight rotation just south of Angola where the tornadoes formed. In fact, radar was suggesting and picking up on rotation for about 20 minutes while the storm traversed Steuben County. Thankfully, the rotation wasn't strong enough to produce a tornado for that entire duration. 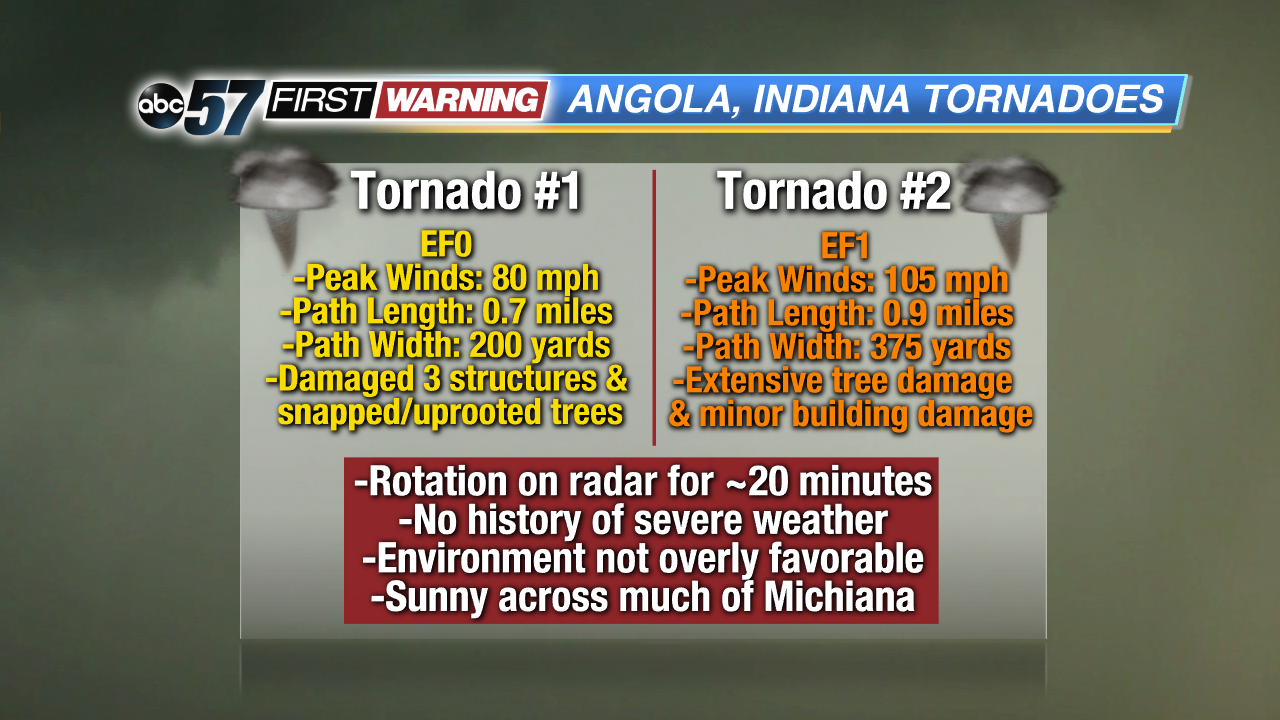 No Tornado Warning was issued by the NWS during either tornado's lifetime, but a Severe Thunderstorm Warning was issued once the storm passed to the east of Angola and entered Ohio and Michigan. Still, the City of Angola did sound its tornado sirens while the storm impacted the region. Dating back to 1950, these tornadoes hit closer to downtown Angola than any previous tornado.

No significant structural damage was reported with either twister, but that could have been different if they occurred just a few miles north in the more populated center of Angola, which has a population of more than 8,000. While this was all happening, there was rain falling in parts of Elkhart, LaGrange, Cass, and St. Joseph (MI) Counties. Some of that rain was extremely heavy and led to instances of flooding. Meanwhile, the rest of Michiana was basking in sunshine, believe it or not.