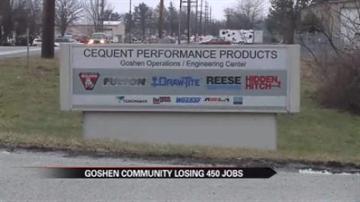 The company, which supplies auto makers and after-market suppliers with trailer hitches, will now be able to close its Goshen plant. The shutdown will leave its 450 employees jobless by the end of the year.

The last thing standing in the way of the move, is no longer an obstacle for the factory.

United Steelworkers Union Local 9550 took the matter to court. It was employees’ last hope that their jobs might be saved, but now that hope has been replaced with disappointment.

Last year, the president of Cequent Performance Products announced the Goshen-based factory would be moving to Mexico eliminating 450 local jobs.

It was a surprising blow to employees like Richard Clark, who has already lost one job to outsourcing in Mexico.

"I think it’s kind of cheap to move off like that. It’s not like they are losing any money. They are making money and i think they could do just as well here," said Clark who has been an employee at Cequent for 11 years.

This past November the United Steelworkers Union filed a grievance on behalf of all the employees, saying the outsourcing of jobs to Mexico was a direct violation of its collective bargaining agreement with Cequent.

But Wednesday, U.S. District Court Judge Miller ruled that the company was not in violation of the agreement, allowing Cequent to proceed with its plans to move the factory to Reynosa, Mexico.

It was a devastating decision that will now force disappointed employees to start all over, as they hope to find other work -- a feeling Clark knows all to well.

"It kind of puts a pinch on you. I have to start work someplace else. I have to establish myself again and work and move up to where I was again, hopefully," said Clark.

According to court documents, the company will start letting employees go sometime in February. More than half will remain employed through the end of June and the remaining employees will stay on until December of this year.