Unwanted chickens can be dropped off at Unity Gardens 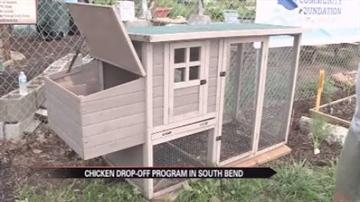 The new chicken drop off point is at the LaSalle Square Unity Gardens. The co-founders of the gardens, Mitch Yaciw and Sara Stewart, started the program to make sure residents who changed their minds about raising chickens had someplace to take them.

It has been just over six months since the South Bend City Council passed the urban chicken ordinance allowing female chickens within city limits.

"Part of the whole getting the chickens ordinance passed is the city wanted to make sure there weren't chickens running loose and that people did have a safe place to turn in chickens if they found them on the street,” said Yaciw.

Unity Gardens is working with the South Bend Urban Chicken Alliance to make sure chickens are not on the loose in the city.

"Animal Control is a little bit overworked so they couldn't do it. So what we did is we've actually set up a network of people, and we've really barely had to use it. We've had to use it twice as far as I know,” said Yaciw.

"We made it accessible twenty-four hours a day. You can come out anytime and drop off a chicken,” said Yaciw.

Since Yaciw and Stewart have their own chickens at their farm-they haven't needed any extra funding for the project-they have everything they need already.

"At this point, since there's been so few chickens there's not really any funding. Thank god, I mean it's not like dogs and cats where we have lots of problems with them,” said Yaciw.

Yaciw says he thinks time will tell whether South Bend residents can handle their chickens.

"I do wonder if at some point in the winter or there's going to come a time of year where people are going to realize that they're a little more work than they want and are going to want to turn a chicken in,” said Yaciw.