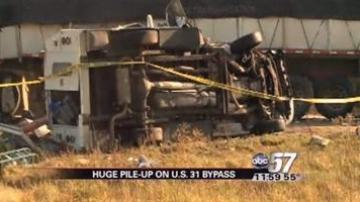 Troopers said the pile-up had police scrambling to clean up what is described as a huge mess.

Kevin Greenwood, a passing driver, contacted us on Facebook and said there was "steel coil in the median, a cryogenic tanker on the right shoulder, and several cars are stopped."

We were told that two semis were also involved.

Officers say a car slowed down in the heavy fog, causing a chain reaction crash.

Amazingly, only was person was hurt and is expected to be okay.

It took several hours to clean up the scene so traffic could resume.