UPDATE: 2-year-old boy in coma after car crashes into tree 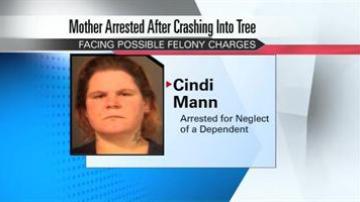 SOUTH BEND, Ind.-- A toddler is clinging to his life after a single car crash on Friday. Police arrested the child's mother, 31-year-old Cindi Mann, for neglect of a dependent and operating a vehicle without a driver's license.

Police said Mann was driving when her car crashed into a tree in the 3000 block of South Locust Road.

Captain Phil Trent with the South Bend Police Department said the 2-year-old boy is in a coma at Memorial Hospital where he is suffering from a closed brain injury.

Mann's 6-year-old daughter was also in the car and she had minor injuries.

One witness said the scene was horrific and Mann was trying to convince all the neighbors that someone else was driving the car.

Karrie Lutzke said, “The little girl was trying to get out of the car and she had blood all over her face and the mom was just screaming and yelling ‘You saw the person, you saw the man, he got out of the car.'"

Lutzke said it appeared that Mann was more worried about staying out of jail than helping her kids who were injured.

“The little boy had a big goose egg and he was not doing well, and the little girl got out of the car and she had blood all over her face, it was horrific and she didn’t even care," said Lutzke.

Investigators said they believe Mann didn't properly strap her son into the car, and they are running a toxicology test to see if she was intoxicated.

Lutzke said, “Apparently she was texting and driving and not paying attention to the road and she got into the accident by going across the median, over the sidewalk, and then hitting a tree.”