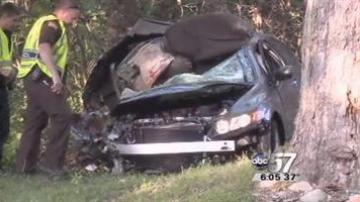 SOUTH BEND, Ind. -- The 20-year-old woman who was killed in a rollover crash on the 66500 block of Oak Road Wednesday has been identified.

Katherine Lynn Thompson and the driver, her 17-year-old cousin, were driving northbound on Oak Road just after 5 p.m. when the teen suddenly lost control of the car, hitting two trees and flipping the car on its side.

The 17-year-old girl was rushed to Memorial Hospital in South Bend and was treated for non-life-threatening injuries. Thompson was pronounced dead on the scene.

Thompson has an address listed in Lafayette, but she had apparently been recently staying in the South Bend area.

The name of the 17-year-old driver is not being released at this time because of her age.

St. Joe County Police Investigators and the FACT team have concluded that speed was the primary factor in this crash. Both women had been wearing their seat belts at the time.

Investigators are now working to determine the estimated speed of the vehicle prior to and at the time of the crash. They also say they have not had an issue with speeders on that stretch of road in the past.

Results from the toxicology tests are still pending.